The moon is a fragment of the destroyed planet Phaeton 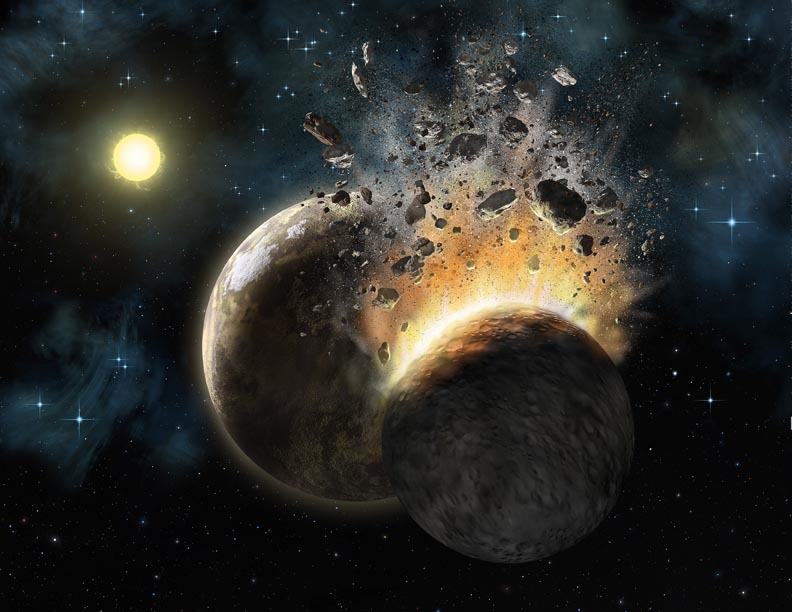 An unusual hypothesis about the origin of the moon expressed in the past in the Main astronomical Institute. Sternberg the Colloquium, “Earth in the early stages of Solar system formation” leading researcher Institute of astronomy Alexander Bagrov. In his opinion, the Moon is nothing like a piece of the once destroyed planet Phaeton, which was captured by Earth’s gravity.

The version about communication of a Phaeton with the Moon sounded and earlier, but the first hypothesis was substantiated from a scientific point of view.

– The existence of the planet Phaeton was first expressed 200 years ago by German scientist Olbers, – said Bagrov. – When between Mars and Jupiter were discovered just three of the asteroid, he wondered whether they are the remains which once existed on this planet orbit?

For many years this hypothetical body was called planet of Olbers, while in Soviet times the astronomer from Pulkovo Observatory Sergei Orlov called her a Phaeton, seeing in her fate similarity with the fate of the Greek hero, the son of the Sun God Helios. According to legend, while travelling across the sky on a Golden chariot, Phaeton lost the way among the heavenly constellations, and Zeus the Thunderer, to save the Earth, hurled lightning into the chariot, destroying it. Phaeton fell to the Ground and died. Also, by analogy with the ancient Greek Phaeton, died and a hypothetical planet between Mars and Jupiter.

– Why you do not like the existing hypothesis about the formation of the moon?

Astronomers are considering two hypotheses — either the formation of the moon from the same material together with the Land, or to shock origin, which part of the earth’s crust was thrown into space and it formed the Moon. Now this version is basic, but, by and large, only journalists. Scientists are skeptical, because the law of celestial mechanics, if somebody from the outside would hit the Earth, it necessarily would have changed our circular orbit to elliptical. And if the material was ejected from Earth, it was bound to come back.

And what are we seeing: the Moon does not fall to the Earth, and our planet revolves in a smooth circular path.

But proponents of the impact-version say about hitting on a tangent, which threw away the substance, but could not change the orbit…

This “collision” in which the orbit does not change, could not be. Start very artificial constructions, exposure modeling, but I believe that they are extremely complex and still not answer many questions.

– How do you think the story of the moon?

– Most likely, the planet Phaeton was destroyed by impact from outer space. When you consider that inside she was the same liquid as our planet (its crust is only 20-30 km, everything else – the molten depths), then the result of the impact of all the liquid spilled all over the Solar system. Little bits of Phaethon have become some of the asteroids, and one large piece, cut off in an attack from the opposite side of the planet, entered the orbit of the Sun. This part of the Phaeton, consisting mainly of crust with magma, and would have flown around the sun, but one of many of their fellows was another blow stopped and placed under the action of gravity.

On the moon, on the back of it, there is a large crater (1200 km diameter of the moon in 3 thousand km), which is called “depression”-depression. Its depth is approximately 3 km away.

– What happened with him further in the Ground he crashed?

– No. It was a viscous body (crust with magma) under its own gravity converted to spherical form. Once on an elliptical orbit near the Earth, it began to experience from the Land side the strongest influence of the tides. The tides led to significant results: the Moon acquired an almost circular orbit, period of rotation became equal to the period of its revolution around the Earth (which is why she’s watching us all the time on one side), and the plane of the moon’s orbit nearly coincided with the plane of earth’s equator. them, only captured. The capture hypothesis explains the surprising fact that only the Earth has a large satellite and the other terrestrial planets they are not.

– That it is not so says the composition of the moon, which mainly consists of basalts, silicates, and the crust of the Earth, and if it was formed from the nucleus of the Phaeton, it would have been iron.

– How your colleagues reacted to your performance?

– Many were against my hypothesis. We have a majority of scientists are committed to the school’s dynamic cosmology Otto Schmidt, who 60-70 years ago suggested the hypothesis that the Solar system evolved from a protoplanetary clouds where the world gathered from different fragments. And this idea, Jupiter by its gravity didn’t allow the planet Phaeton is collected, that is, it did not exist. This school is very strong, worldwide considered it.

– Where, in the opinion of the representatives of the school of Schmidt, there was a Moon?

The pupils of Otto Yul’evich put forward different versions. In particular, Evgenia Ruskol his entire life studying the moon and still be sure that the Moon formed with the Earth from the same cloud. The hypothesis suggests that the Earth and Moon simply grew in the same orbit as a double planet. But it doesn’t explain why one body was rich in iron and the other is not. Therefore, in recent time has been the development of the theory of impact, but they are as I have said, is also not tenable. Planet gets a kick from the outside, had to change its orbit, as Mercury, received in due time, a similar impact that left a crater Koloris on the surface, its orbit becomes elliptical.

– When was the attraction of the chaise-the moon?

– It is known that the age of the moon, Earth and Sun are about the same. The destruction of Phaeton and the formation of the moon from its fragments near the Earth occurred during the birth of the Solar system about 4 billion years ago.

The comment of the staff of the Institute of Geochemistry and analytical chemistry im. Vernadsky RAS, academician Michael marova:

Now, from my point of view, for this hypothesis there is no reason, from what seems a very controversial hypothesis of the existence of the planet Phaeton. First, such a large body, comparable to Mars, could not be formed owing to the close proximity to Jupiter, mass 300 times bigger than Earth. Jupiter has a very strong gravitational effects, tidal effects on its immediate surroundings. Such exposure will allow you to gather together a large enough body.

Second, if in this area to collect all the major bodies, like Ceres and Vesta, their total mass is much less than the mass of the planet, 1/1000 the mass of Earth. Thirdly, the main asteroid belt is quite extended education, approximately 70 million km. within this zone there are bodies of different chemical and mineral composition, which does not fit into the idea of one the planet the ancestor in its composition.

As for the formation of the moon, I am inclined to think that it was probably the formation of a uniform protoplanetary cloud. Previously, this hypothesis was developed Evgenia Ruskol, Eric M. Galimov, and more recently this theory involved my team at the Vernadsky Institute.