The most ancient images of dogs were found in Saudi Arabia 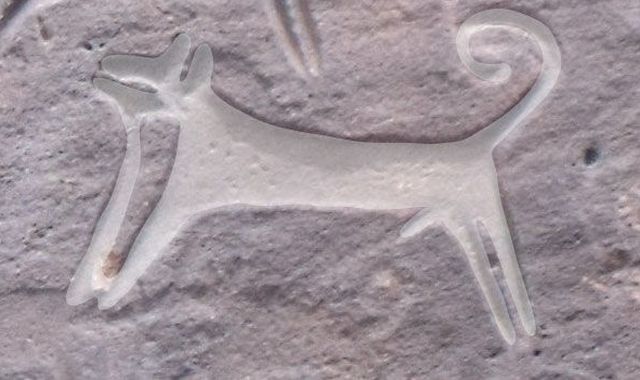 The oldest images of dogs were discovered by scientists from the National Museum of Natural History at the Smithsonian Institution. The find was made in the northwest of Saudi Arabia.

The images were carved in a rock next to a dried-up river in the Arabian desert. One of the scenes on the rock depicted a hunter with 13 dogs. Two of them were connected to the figure of man by lines, which, apparently, meant a leash.

Scientists believe that petroglyphs – 8 thousand – 9 thousand years. They can be considered the oldest images of dogs. Figures also show that a man learned to teach dogs to co-hunt for thousands of years earlier than was generally believed.

The American scientist together with his German colleagues managed to catalog over 1,400 panels in the last three years with almost 7,000 images of animals and people found in the region.

The oldest drawings – about 10 thousand years. They depict the figures of women. Petroglyphs depicting dogs were created later. Dogs are depicted with raised ears, short muzzles and curled tails.

In addition to the recently discovered scene with dogs, other similar drawings were found. The number of images of dogs is now several dozen. In some drawings, dogs look at wild monkeys, on others they hold goats and antelopes for the throat and stomach.

According to archaeologists, drawings of dogs in the Arabian desert are older than drawings on previously found fragments of dishes from Iran, which are less than 8 thousand years old. Scientists believe that the dogs depicted on the rock resembled modern Canaan dogs.