The most bizarre theories about the pyramids 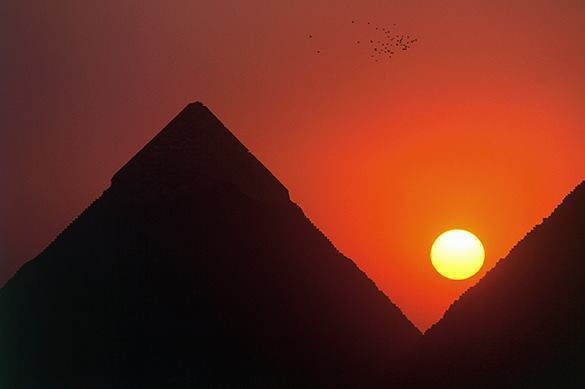 Ancient Egyptian pyramids — one of the biggest historical mysteries and world. Still not quite clear, nor how and who built them, nor what was their original purpose… In this regard, there were many non-standard and even conspiracy theories, some of which look absolutely fantastic.

The pyramids were built by Atlanteans

The proof of this find in Herodotus, describing a lost city. According to this hypothesis, the escaped inhabitants of the submerged Atlantis migrated in Egypt, where he began to build the pyramids. They had a cultural purpose — they were monuments to the dead continent, the homeland of the Atlanteans…

The pyramids were not tombs, and altars

The oldest of the Egyptian pyramids are considered to be the remains of the step pyramid complex at Saqqara. The complex was built around 2650 BC by order of Djoser (the name means Holy), the second Pharaoh of the third dynasty of Egypt, ruled some 2635-2611 years BC. The construction was entrusted to the famous architect Imhotep.

Exactly Imhotep is considered the founder of pyramidal forms in architecture. He proposed to build on over a stone emphasised (in Arabic — bench: so-called rectangular structure, which was to serve as the burial place of the Pharaoh) three mastaba smaller size, turning the tomb into a four-step pyramid. The size of its base was 125×215×115 meters. In the future, the number of stages was increased to 6, and the construction has reached 61 meters in height.

Stage, the researchers believe, had a symbolic meaning — for him and Pharaoh after the death had to climb to the sky… Remember that the ancient Egyptians did not do anything without regard to the Divine power. That Djoser wanted to ease the transition to another world and a relationship with God, and therefore decided to erect an altar in the midst of the land of Egypt…

This is a very common theory about the pyramids. The fact that buildings are well oriented to the cardinal points, and the number of steps corresponds to the number of days in a year.

At least they say so about the great pyramid of Giza French researchers have Belizal and Someri. Scientists suggest that could exist copies of the pyramid, representing a sort of ancient CPS receivers. After being put on ships, they caught the signal from the great pyramids that helped the sailors to keep the course home. However, this is the most unproven of the currently existing theories about the pyramids.

The pyramids were the granaries

This hypothesis put forward by a medieval monk named brother Bernard. Somehow he managed to make the journey to Egypt, whence he returned firmly convinced that the pyramid was originally intended for the storage of grain. In proof of brother Bernard quoted lines from the book of Genesis: Joseph predicts Egypt the famine, and advises Pharaoh to build a tower to be able to store food supplies… oddly enough, this very prosaic theory of the origin of the pyramids is still very popular.

Advanced the ancient Egyptians supposedly knew how to concentrate the cosmic energy. To this purpose were the pyramids. Why was the energy from space? Probably needed it the pharaohs, who were going to live forever, fueling the energy of the pyramids…

This version of love ufologists. They say, built the pyramids not humans, and aliens. They served as reference points for landing alien ships… And by the way, it is possible that these extraterrestrial beacons operate to this day.

British mathematician John Legon suggested that in the form of buildings encrypted huge amount of information accumulated for all time of existence of civilization at the time of construction of the pyramids. Confirmation of this hypothesis may be the fact that the ratio of the base of the pyramid to its height is exactly

Thus, each structure can represent a map projection of the Northern hemisphere in a scale of 1:43200.

Even if the ancient Egyptian civilization perished, that such magnificent buildings could have been preserved, and the representatives of new civilizations would be able to learn from ancient knowledge…