The mysteries of Earth’s magnetic field 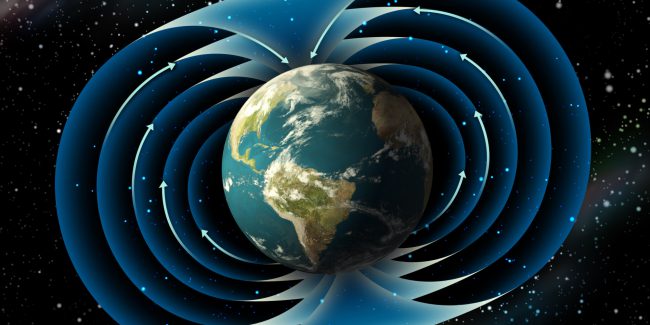 The Earth’s magnetic field protects us from deadly cosmic radiation, and without it, as we know, life could not exist. The movement of liquid iron in the outer core of the planet, the phenomenon of “geodynamo”, generates this field. But as it came after and was maintained throughout the history of the Earth is a mystery to scientists.

New work published in Nature by a team led by Alexander Goncharov of Carnegie, sheds light on the history of this very important geological formations.

Our planet was formed of a hard material that surrounded the Sun in its youth, and over time, the densest material, iron, sank, sank deeper, forming layers, which we know today: the core, mantle, crust. Currently the inner core as a solid iron along with other materials, which are tightened during the process of layering. The outer core is represented by a liquid alloy of iron, and its motion produces a magnetic field.

A deeper understanding of how heat is conducted in the solid inner core and liquid outer core, it is necessary to piece together the processes by which our planet and its magnetic field has evolved — and, more importantly, the energy that supports constant magnetic field. But these materials apparently exist only under the most extreme conditions such as very high temperature and very high pressure. Goes, on the surface their behavior is entirely different.

“We decided that it would be imperative to directly measure the thermal conductivity of core materials under conditions that comply with the conditions of nucleus — says Goncharov. — Because, of course, we can’t get to the core of the Earth and to take samples.”

The researchers used a tool called the cell with the diamond anvils in order to simulate the conditions of planetary core and to study how iron conducts heat in these conditions. A cell with diamond anvils compresses tiny samples of material between two diamonds, creating extreme pressure of the deep Earth in the laboratory. The laser heats the material up to nuclear temperatures.

Using such a “nuclear laboratory”, a group of scientists were able to study samples of iron at temperatures and pressures found inside planets from mercury to the Earth — pressure from 345 000 to 1.3 million, and normal atmospheres and from 1300 to 2700 degrees Celsius — and to understand how they conduct heat.

It was found that the conductivity of such samples of iron corresponds to the lower end of prior estimates of the thermal conductivity of the Earth’s core — between 18 and 44 Watts per meter per degree Kelvin, in units that scientists use to measure such things. This suggests that the energy required to maintain geodynamo has always been available from the beginning of Earth’s history.

“To better understand the conductivity kernel in the future, we will study how non-ferrous materials, which were tightened in the kernel, along with the sinking of iron, affect the thermal processes inside our planet,” says Goncharov.