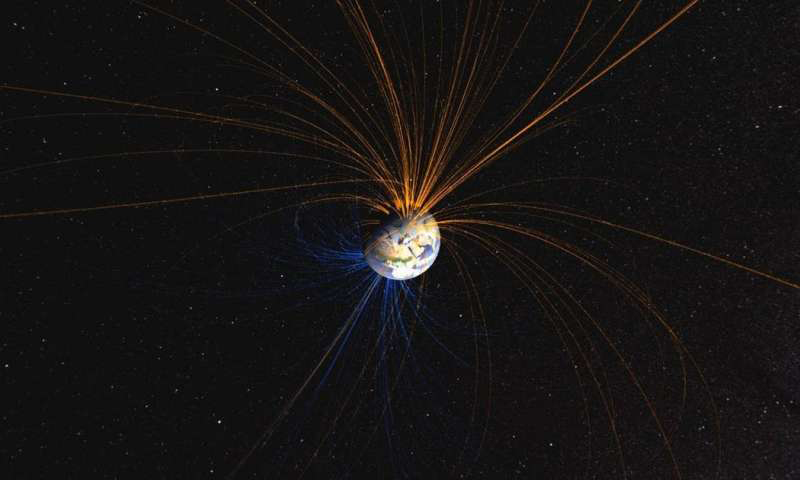 The Earth’s magnetic field, generated about 3000 km below our feet in a liquid iron core, piercing our entire planet and spreading far into space – protects life on Earth and satellites in orbit from the harmful radiation of the Sun. But this protective effect is far from constant, since the field strength varies considerably both in space and in time.

Over the last century, the field strength has changed relatively slowly: the biggest change is the 10 percent drop in field strength in the South Atlantic, which is still large enough to cause the electronics of satellites that fly through this region to fail.

However, new observations and simulations show that a much larger change, a very strange and mysterious one, occurred about 1000 years BC (3,000 years ago) in a much smaller area and was anomalously local. This “geomagnetic failure” gives a new understanding of the dynamics and evolution of the Earth’s field, which is now beginning to unfold.

So, what are the prospects and consequences of such an event in the near future?

The geomagnetic malfunction that occurred 3000 years ago was first identified with the analysis of the composition of copper slag collected in Jordan and Israel. They were dated using radiocarbon analysis.

The scientists then examined the copper using complex laboratory methods to determine what the Earth’s magnetic field was at that time-relying on the fact that when the molten iron quickly cools, it freezes with the signature of the field at that moment. Taking samples from different layers of the slag heap – with slightly different ages and magnetization – they also could see how the field strength changes with time.

The unexpectedly high rise and fall of the field around 1000 BC was also found in samples from the territory of Turkey, China and Georgia. It is noteworthy that the field strength in India, Egypt and Cyprus at about the same time was absolutely normal, indicating that the width of the area in which the 100% fall in the strength of the Earth’s magnetic field reached only 2000 km.

Such a rapid change in such a small area makes this geomagnetic malfunction, one of the most extreme changes in the Earth’s magnetic field, ever recorded.

The failure of the geomagnetic field of the planet, observed in Jordan, is the result of a much stronger and more specific magnetic feature created in the liquid core of the Earth. The process that generated the crash is still shrouded in mystery, although it is probably related to the flow of iron inside the core of the planet that moves around the magnetic field as it moves (currents create magnetic fields). The core heats up from below and cools from above, so it is believed that inside the iron there is an intense turbulent movement, like a strongly heated pan of water. One possibility is that a local field failure extends to the surface from the core of the Earth by a jet of ascending iron.

After this local fall of the field strength, it could move to the northwest before merging with other magnetic fields near the geographic poles.

All these options suggest that the behavior of liquid iron at the top of the Earth’s core around 1000BC was very different from the behavior observed today. Most of our knowledge about the core occurs over the past 200 years, which corresponds to the time when measurements of the direct magnetic field were available. Prior to the opening of the splash, there was no reason to suspect that the speed of the main stream would be significantly different at 1000BC by today.

However, explaining the rapid changes associated with the peak, requires a flow of five to ten times more than at present, a large change in a short period of time. Moreover, such a narrow jump requires a localized flow, which contrasts with the global circulation that we see today. The prospect that the iron core can flow faster and change more suddenly than previously thought, along with the possibility that in the past there were even more extreme similar phenomena, defies traditional views on the dynamics of the core of the Earth.

Of particular importance are geomagnetic storms (caused by solar wind), which are known to cause power outages and malfunctions in satellite and communication systems. It is estimated that the economic consequences of violent storms reach astronomical sums.

Geomagnetic storms are usually the most common in regions where the Earth’s magnetic field is unusually weak. The “magnetic malfunctioning” zones are areas of an unusually strong magnetic field, but the fundamental law of nature means that they must be accompanied by regions of a weaker field in other parts of the globe. The key question is whether the field becomes slightly weaker over a large area or becomes very weak in a small region. The “field surge” scenario may be similar or more extreme than the current weak spot in the South Atlantic.

Whether such anomalous jumps in the strength of the Earth’s magnetic field will be difficult to say in the near future. Until recently, the Jordanian anomaly was the only such event ever to be observed. However, at the present time there is an intriguing new evidence of another similar anomaly in Texas that also occurred around 1000 BC.

In combination with numerical simulations that simulate the dynamics of the Earth’s core, it will soon be possible to make the first predictions of how often such abnormal jumps occur in the strength of our planet’s magnetic field, and the most probable places where they could have occurred in the past and could occur in the future. It can happen that they are more common than we think.