The mystery of the existence of mysterious floating islands is revealed 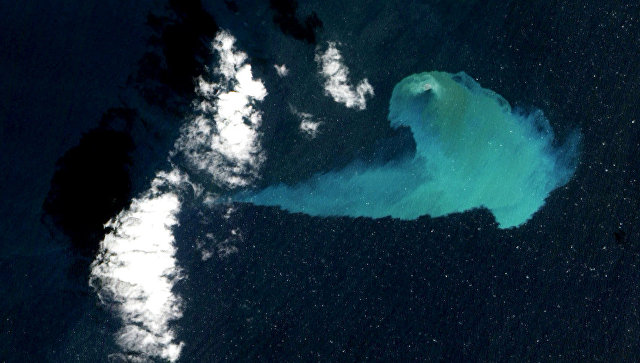 Mysterious floating islands periodically appear in the oceans of the Earth due to the unusual properties of volcanic pumice, able to “soar” on the surface of the water due to the force of surface tension and due to air bubbles associated with it, according to an article published in the journal Earth and Planetary Science Letters.

“The puzzle of why pumice can float on the surface of water and not sink for a long time, has long worried the minds of our colleagues.” We initially thought that the pores in the pieces of these rocks are isolated from the environment, like a letter in a bottle that sailors throw into the sea at But it turned out that the pores in it are open, but the pumice does not sink in. There was a question why this is happening, “says Kristen Fauria of the University of California at Berkeley, USA.

Ship logs of the era of the Great Geographical Discoveries and later periods of history often contain records of mysterious floating islands – scraps of earth and rocks that the sailors met while traveling through the Pacific and Indian oceans. Initially, scholars and historians considered such stories to be fables, but today many researchers take such statements seriously.

All doubts about their existence were discarded in July 2012, when the eruption of the underwater volcano Kermadec off the coast of Samoa led to the formation of a giant floating island area of ​​550 thousand square kilometers and a few meters high. It lasted for several months, before the waves and forces of the elements destroyed it on many small “pumice” rafts.

The origin of these islands has long been of interest to geologists and evolutionary biologists, since such floating structures are now considered one of the options for how large animals could penetrate isolated islands and new continents, crossing the seas and oceans.

Fauria and her colleagues have uncovered the secret of why these islands remain afloat for a long time, but eventually gradually descend to the bottom of the sea, having studied the structure of pieces of pumice immersed in water, using a particle accelerator and a tomograph. To do this, scientists used a simple but ingenious technique – they loaded pieces of pumice into the water and covered them with wax, preventing water from leaving the miniature analog of the floating island.

These experiments gave a fairly trivial answer to a long historical riddle – it turned out that water can not completely fill the voids inside the pumice stone due to the surface tension that prevents the filling of the smallest pores in the volcanic rock and contributes to the formation of microscopic air bubbles in them.

It, as scientists explain, does not allow water to expel air from these channels or dissolve it in itself, so that the pores in the pumice are filled not with water but with its mixture with a large number of air bubbles. Over time, the air from the bubbles gradually dissolves in the water, and eventually the real floating islands descend to the ocean floor.

Now scientists are trying to understand how the giant floating islands, whose dimensions are several orders of magnitude greater than those pieces of pumice that normally spawn land and underwater volcanoes, arise. Disclosure of the mysteries of their birth and ascent to the surface, according to Fauria and her colleagues, will help us understand how often such structures could appear in the past and affect the evolution of life on Earth.