The neuronet unmistakably diagnoses a disease on a smell

It is known that diseases can change a metabolism of cells and lead to release of the specific flying organic substances (FOS). Diagnostics on smells practiced still in the ancient time (approximately since 400 B.C.), however its accuracy strongly depended on an olfaction of the doctor. Therefore scientists look for ways to increase reliability of such diagnostics by means of technologies.

In this regard methods of a gas chromatography and a mass spectrometry are considered as the most perspective. Last works showed that they can be used in diagnostics on a smell in an infektologiya and an oncology. At the same time chromatographs and spectrometers are bulky and expensive. Besides, the universal equipment for detection of different illnesses on their basis doesn’t exist.

In new work scientists from the Israeli institute of technology and other institutions used for this purpose the Na-Nose system. It includes a portable gas analyzer on the basis of the nanoparticles of gold or carbon nanotubes covered with organic ligands and a program part in the form of an artificial neuronet. The last allows to automate diagnostics. 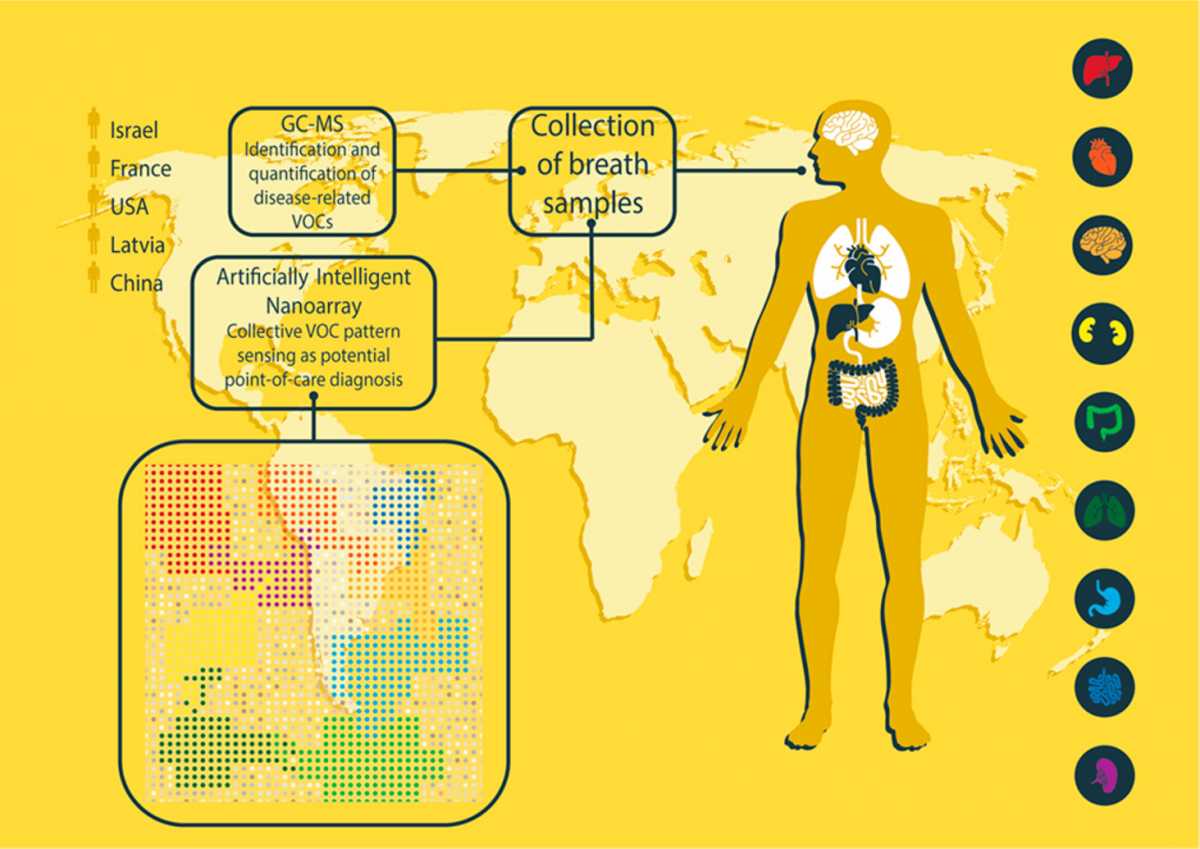 Design of an experiment.

Being bound to ligands, exhaled by the person FISHING change electric resistance between nanoparticles or nanotubes then the signal is processed by an algorithm. The system was tested on models of respiration of 1404 people from five countries (Israel, France, the USA, China and Latvia). Most of examinees (813 people) were patients of local clinics.

In total in work 17 diseases, including lung cancer, illness Krone, Parkinson’s illness, multiple sclerosis, an ulcerative colitis and others were considered. Following the results of training of an algorithm (earlier it was tested for more than 8000 patients) accuracy of single recognition of an individual disease made 86 percent. The system was also capable to parallel diagnostics.

According to authors, despite a good indicator of recognition, the method isn’t completely universal. So, with diagnostics of a series of diseases, for example a prostate cancer, the system didn’t cope — the tests which aren’t bound about FISHING can be more pertinent in their case. Now scientists work on mobility of the device: it is planned to be adapted to smartphones and other electronics.