The North Atlantic Current has become weaker by 15% 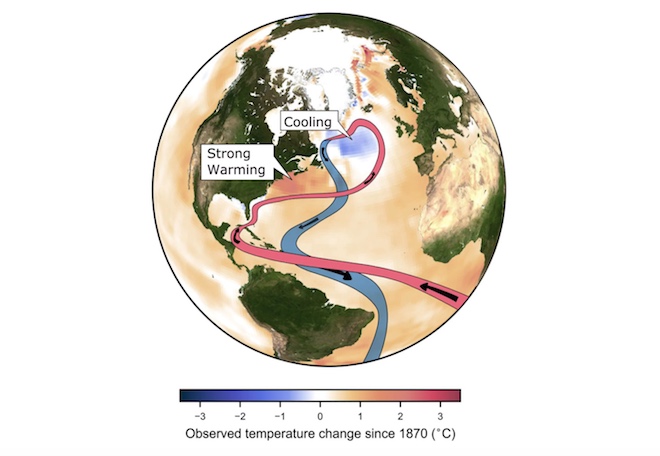 Circulation of water in the Atlantic Ocean has slowed due to climate change, according to a team of scientists from the Potsdam Institute for the Study of Climate Change in Germany.

The North Atlantic Current, which carries heat to the high latitudes of the Northern Hemisphere, has become weaker by 15% since the mid-20th century to a “new record low”, scientists concluded. The flow of water has decreased by 3 million cubic meters per second, which is equivalent to almost 15 Amazon rivers.

The current transfers warm water from the equator to the northern corners of the Atlantic, and cold water – back down through the ocean depths. Due to the current in Western Europe, moderate weather, and meteorologists associate temperature changes in the North Atlantic with recent summer heat waves.

Circulation is important for fishing along the Atlantic coast of the United States, which is a key part of the New England economy, which has undergone strong changes in recent years – due to the loss of cod and the lobster population growing off the coast of Maine.

Partly the slowing of the North Atlantic current can be explained by the melting of the ice sheet of Greenland, which changes the water composition in the region and disrupts natural processes.

But completely the role of climate change in the slowing of the ocean current is not clear, and another study has come to somewhat different conclusions.

Scientists from Reading University found that the North Atlantic Current has slowed in the last 150 years. They believe that now it is weaker than at any other time in several millennia.

Two studies have differences. The second work suggests that the slowdown probably began for natural reasons around the time of the industrial revolution in 1850, and was not triggered by anthropogenic climate change. But, as in the first study, the second one believes that the circulation will remain weak or even weaker during the current era of warming.