The origin of the treasure from Carambolot 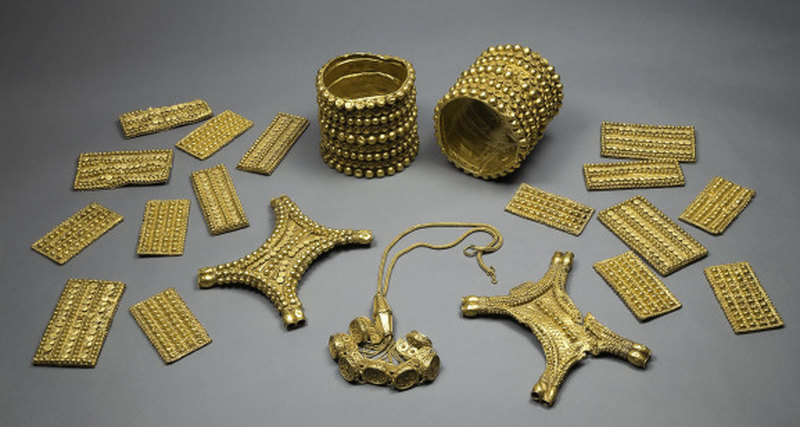 Specialists managed to establish the origin of the treasure of about 2700 years old, discovered near Sevilla, Spain, in 1958.

The new study solved a riddle connected with the origin of the treasure from the Carambolos, an amazing collection of ancient gold items discovered three kilometers from Seville in 1958. The results of the study are briefly reported by National Geographic.

When the 2,700-year treasure was discovered, immediately there were hypotheses about its connection with the Tartessian Power existing on the territory of present-day Spain in the I millennium BC. e. Ancient sources described this civilization as rich and sufficiently developed. The wealth of this power and its sudden disappearance, which occurred about 2500 years ago, led to exotic hypotheses, according to which Tartess might be, for example, a colony of mysterious Atlantis.

Other hypotheses linked the treasure with the Phoenicians – the ancient Semitic Middle Eastern people, who first arrived in the western part of the Mediterranean in the VIII century BC. e. and organized a trading port there, which is now the Spanish city of Cadiz.

A treasure from the Carambolo includes 21 gold pieces of fine work. Archaeologists believe that it was buried in the VI century BC. E., although it is noted that most of the ornaments were made two centuries earlier. In order to put an end to the controversy over the origin of the treasure, Ana and Navarro, director of the Archaeological Museum of Seville, and other specialists who participated in the new study, studied two decorations from the Carambolos: an elemental analysis of the products was carried out using mass spectrometry, as well as isotopic analysis. Researchers also – for comparison – studied the gold objects found in the burial in the city of Valencina de la Concepion (it is not far from Seville) and dated to the 3rd millennium BC. e.

The results of both analyzes showed that products from Carambolo and from Valencina de la Concepcion were made from local gold. However, with this decoration could be created using Phoenician techniques, experts suggest. In addition, scientists believe that products from the Carambolos could have been previously melted from older artifacts from burials in Valencina de la Concepion. However, additional research is needed to confirm this hypothesis.