The ozone layer is not being restored, and scientists can not understand why 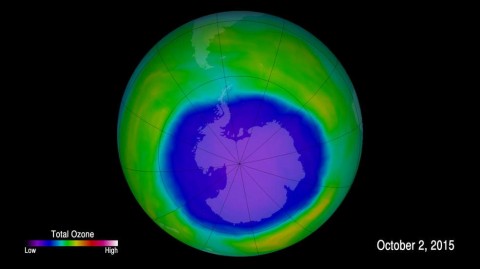 For slightly more than three decades, the world community has come together for a historic agreement, in order not to allow a hole in the ozone layer to expand. This international treaty, known as the Montreal Protocol, banned the use of harmful chemicals that adversely affect the Earth’s natural ozone barrier, which in turn protects us from the ultraviolet radiation of the Sun.

A recently published article in the journal of the European Union of Geophysical Sciences “Atmospheric Chemistry and Physics” suggests that the recovery of the ozone layer at lower latitudes is not going as expected. In particular, the ozone layer at the middle and low latitudes, where most people live, demonstrates an unexpected decline for reasons that are still unclear.

Today it is lower than 20 years ago, which is important, because the data obtained do not correspond to what our models of atmospheric processes suggest, which should occur in the lower layers of the stratosphere.

The results obtained may be a sign of the problem associated with the inaccuracy of atmospheric circulation models that have been used so far. But the ozone layer can also become thinner due to the fact that ozone-depleting substances such as chlorine and bromine, not regulated by the Montreal Protocol, reach the ozone layer of the stratosphere.

Scientists make assumptions that the participation of so-called “very short-lived substances”, exemplified by chlorine and bromine, was previously ignored, as they did not have to survive long enough in a free state to reach the ozone layer. Therefore, researchers propose to correct existing models of the Earth’s atmosphere circulation taking into account the assumed factors.

So far only one thing is clear: the still unexplained low-latitude ozone loss should not be perceived as a failure of the Montreal Protocol, which will result in a million cases of skin cancer per year by 2030 per year. The protocol also helps to combat climate change: from 1989 to 2013, the measures provided helped to avoid emissions of 135 billion tons of pollutants into the atmosphere. This is equivalent to an estimated 5.6 billion tons of CO2 per year.

Scientists believe that further action against climate change within the framework of the Montreal and Paris climate agreements needs to be continued. At the very least, constant monitoring of both the ozone layer and the Earth’s atmosphere as a whole is required, since new unexpected environmental factors that are not taken into account by existing climate models may appear.