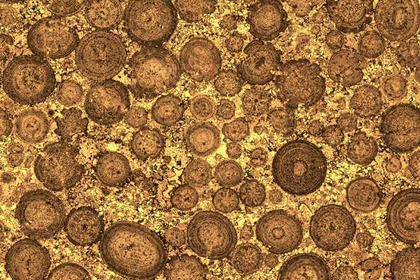 Scientists of the Australian National University found that some of the limestone material used in the construction of the Pentagon, the Empire State Building, as well as other buildings around the world, originated about 340 million years ago due to the vital activity of ancient bacteria. This is reported in a press release on the site Phys.org.

Limestone – sedimentary rock, which consists of molecules of potassium carbonate, forming spherical granules – ooids. Researchers have shown that ooids are formed from layers of mineralized microbes. Previously, there was a hypothesis that granules formed when lime was deposited on the seabed.

Geologists have determined the maximum size of granules that should be formed when mineralized in biofilms – conglomerates of microorganisms, the cells of which are attached to each other. In this case, nuclei are formed, which become the center for the subsequent accumulation of layers. To create the model, specialists used the same methods that were used in 1972 to study the growth of brain tumors.