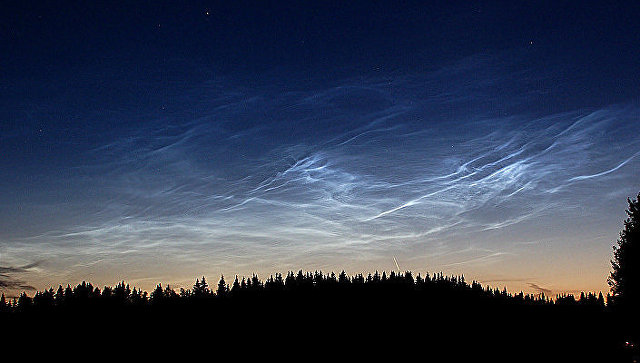 The phenomenon of the appearance of so-called noctilucent clouds in the upper atmosphere of the Earth can be associated with the ancient eruption of the Krakatau volcano, the Roskosmos and the Moscow planetarium said.

Noctilucent clouds are the highest cloud formations in the earth’s atmosphere, arising at altitudes of 70-95 kilometers. They are also called polar mesospheric clouds (PMC) or noctilucent clouds (NLC). These are light translucent clouds, which are sometimes visible against the background of a dark sky on a summer night in the middle and high latitudes.

“The fact that this atmospheric phenomenon was not observed until 1885, many scientists led to the idea that their appearance is associated with a powerful catastrophic process on Earth – the eruption of the volcano Krakatoa in Indonesia on August 27, 1883, when the atmosphere was thrown about 35 million tons volcanic dust and a huge mass of water vapor, and other hypotheses have been made: meteoric, technogenic, the hypothesis of “solar rain.” But so far, many facts in this area are incomplete and contradictory, so the noctilucent clouds continue to be disturbing first concern for many scientists, “- the report says.

How to create a noctilucent cloud

Noctilucent clouds form in the upper layers of the atmosphere, at altitudes of about 90 kilometers, and are illuminated by the Sun, shallowly descending the horizon (therefore in the Northern Hemisphere they are observed in the northern part of the sky, and in the southern hemisphere – in the southern). For their formation, a combination of three factors is necessary: ​​a sufficient amount of water vapor, a very low temperature, the presence of the smallest dust particles, on which water vapor condenses into ice crystals.

“In the formation of noctilucent clouds, the particles of meteoritic dust are probably the centers of condensation of moisture.The sunlight scattered by tiny ice crystals gives the clouds their characteristic bluish-blue color.Due to its high position, the noctilucent clouds glow only at night, scattering sunlight , which falls on them from under the horizon In the daytime, even against the background of a clear blue sky, these clouds are not visible: they are very subtle, “ethereal.” Only deep twilight and night darkness make them visible to the ground observer. ravda, with the help of equipment raised to great heights, these clouds can be recorded in the daytime.It is easy to see the striking transparency of noctilucent clouds: stars are clearly visible through them, “the researchers note.

Noctilucent clouds in the Northern Hemisphere

Observe noctilucent clouds only in the summer months in the Northern Hemisphere in June and July, usually from the middle of June to the middle of July, and only at geographical latitudes from 45 to 70 degrees, and in most cases they are more often seen at latitudes from 55 to 65 degrees. In the southern hemisphere, they are observed in late December and January at latitudes of 40 to 65 degrees. At this time of year, and at these latitudes, the Sun, even at midnight, does not fall very deep beneath the horizon, and its glancing rays illuminate the stratosphere, where at an altitude of about 83 kilometers there appear noctilucent clouds. As a rule, they are visible low above the horizon, at an altitude of 3-10 degrees in the northern part of the sky (for observers of the Northern Hemisphere). At close observation they are noticed annually, but they reach high brightness not every year.