The physicist proposed the justification of the “Theory of Everything” 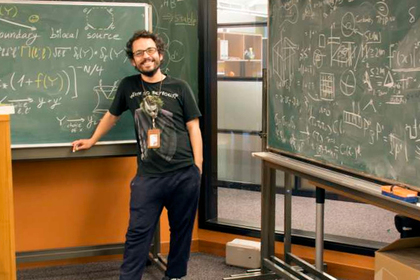 The physicist Yasha Neiman proposed a new way of creating a Theory of everything that combines quantum mechanics with the theory of gravity. For the quantization of space-time, he proposes to combine various physical concepts, including antidestster space, strings and twistors.

Antidesster space (ADS) is the opposite of the de Sitter space, which describes an exponentially expanding universe with positive curvature, where the sum of the angles of the triangle is greater than 180 degrees. The speculative stretching of ADS on a two-dimensional plane will increase the size of the central regions and reduce the areas on the edges, as a result of which the space will resemble the pictures of Escher’s “Limit-Circle III”. This curvature creates a gravitational field that attracts objects to the center of space, and nothing can touch the boundaries of the ADS.

The theoretical physicist Juan Maldasena in 1977 showed that an ADS consisting of three spatial dimensions and one time dimension (the world “3 + 1”) is equivalent to the world of “2 + 1”. For this, he considered a flat two-dimensional surface, called the D2-brane, over which the particles move in the form of strings. In a stack consisting of several D2-branes adhering to each other, the behavior of strings resembles the properties of protons, mesons and gluons in the ordinary world. Although the world of “2 + 1” is devoid of gravity, it is an alternative way of describing ADS with gravity, if we imagine that a stack of branes is a “boundary”, on which everything that happens in the latter is displayed.

This concept, which became the source of the holographic principle, is known as AdS / CFT-matching.

However, according to Yashi Neumann, the holographic principle can not be applied in the universe, which is expanding rapidly. The scientist has developed a mathematical apparatus based on the highest spin gravity developed by the physicist Mikhail Vasiliev in the 80’s and 90’s and the theory of twistors proposed by Roger Penrose in 1967. Higher spin gravity considers the existence of hypothetical fundamental particles with high spin values ​​(3,4,5 to infinity) and it can be considered as a general case of string theory, which also contains higher spins.

Higher spin gravity, as shown by physicists in 2001, can be described using a holographic principle. In addition, its equations contain twistors – mathematical objects that represent points in space-time as rays of light. With the help of twistors, it is convenient to describe quantum mechanical phenomena occurring in a multidimensional space. Thus, using the theory of higher spins, one can relate the holographic principle and the Penrose theory.