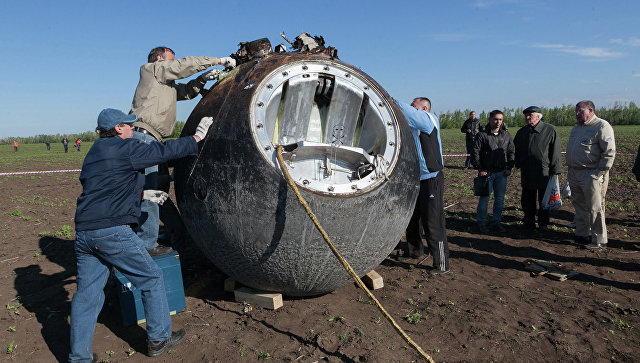 Vladimir Sychev, one of creators of the Bion-M satellites, told as the Russian biocompanions help us to understand how to transfer the biosphere to space as the Russian scientists checked the theory of entering of life for Earth from space and shared thoughts of how the crash of “Progress” will influence the Russian space science.

This week in Presidium of RAS in Moscow there took place the international conference on a space medicine and biology held by Institute of medicobiological problems of RAS. Within this conference the Russian scientists and their foreign colleagues told about the last progress in studying of how space influences human life and other living beings, and opened plans for the future.

Vladimir Nikolaevich Sychev, the deputy director on scientific work of IMBP, told at a conference about what experiments the staff of institute and their foreign colleagues will conduct onboard the new Russian Bion-M2 biosatellite and as these experiences will influence preparation for travel to distant space. He told RIA Novosti about that, similar researches are how important for preserving leadership of Russia in the field of the piloted astronautics.

— Vladimir Nikolaevich, considering serious reducings in financing of a scientific part of the Russian space program the next 10 years and shift of many projects for later terms whether you expect problems for “Biona-M2” and the subsequent biocompanions if the ekonmichesky situation doesn’t improve?

— So far, as far as I know, it is possible to say that these reducings won’t affect a program implementation of Bion. But, actually, it is only our point of view and to tell something precisely in this case very difficult.

Money which is required on implementation of our projects are very modest in comparison with those programs which are kept by Institute of space exploration. There very big money is really allocated, to some projects there are questions, but it is difficult to judge their condition as we take a detached view of them. In general, I can tell that so far problems at us didn’t arise.

— In April, 2014 NASA prohibited to the employees to participate in joint operation with the Russian scientists. Whether it influenced the analysis of results of experiments onboard of “Biona-M” and whether it creates problems with “Bionom-M2”?

— Actually, problems with first Bion weren’t – nobody disturbed our cooperation, and our American colleagues participated in it in full. About second Bion we talk now and we study options. It is difficult to tell, it is good or it is bad, but the situation moves forward.

— Within last Bion you made the most interesting experiment on verification of the theory of a panspermia, possibility of entering of life to Earth from space, and in 2013 you told that his conclusions partially were confirmed, but tablets with microbes have broken up when landing the probe. Whether something managed to you to learn new?

— Yes, we managed to find microbes in these samples, it has turned out that they have survived when landing. Bacteria-ekstremofilam, and usual bacilli managed to make it both. So, in principle, a possibility of survival the dispute of microorganisms in meteorites is proved.

— Nevertheless, all of you equally plan to make similar experiments onboard of “Biona-M2”?

— We will carry out them because, you understand, there are several subtleties. It is necessary to know up to what temperatures the probe case at atmospheric entry is heated as one his party heats up and as another heats up and to compare it to what happens to meteorites. Meteorites, besides, blow up or burn down completely at entry into the atmosphere. Generally, there are many difficulties, it is a lot of moments which need to be specified.

On the other hand, if to trust in a panspermia, then to some extent already now it is possible to say that it is possible. If not to trust in it then the fact of survival of microbes in such conditions tells nothing in itself.

— Recently your colleagues from university of California in Earvin have shown in experiments on mice on the earth that long radiation by space beams leads to decrease in mental abilities. Whether carrying out such experiences on biosatellites is possible?

— We have already received the answer to this question on first Biona. Our colleagues in experiences on mice have found out that long life in an orbit leads to serious changes in work of dopamine system of a brain. It affects learning ability of rodents – it has sharply decreased after flight and return of rodents to Earth.

— Whether it is possible to fight against it somehow? Whether it will interfere with flight to Mars or construction of base on the Moon?

— You see, all these researches are at the earliest stages now, we just begin to accumulate statistics. At us the understanding of only begins to appear what we face in an outer space. How to fight against it?

Experience of the astronauts flying to the Moon and a lunar orbit shows that those from them who went down on the surface of the planet felt on return to Earth better, than those members of crews Apollonov which remained in an orbit. In other words, options of how it is possible to avoid these negative effects, can be the most different, and we only have begun to investigate what causes similar effects.

— As far as in general long experiments in biology in an orbit which can last half a year or year, for studying of similar effects are possible?

— Everything can be made if you have appropriate resources. In principle, it is possible to support animals in an orbit more than 30 days, but it will demand very serious equipment and serious approaches for the solution of this task.

Americans, for example, conduct the researches on mice onboard the ISS, but all the same animals spend no more than 30 days there. There are larger difficulties bound to the fact that actually when you send an organism to space or in principle on any medium isolated from the biosphere, you have to provide it system of vital activity. It is necessary to guarantee that the animal will survive throughout all this term.

For space flight it is rather complex challenge which, probably, can be realized on the ISS, but definitely not onboard biosatellites. Moreover, long experiments with animals aren’t always necessary to us.

For example, if we take typical life expectancy of a mouse and we will compare it with the human life length then the 30th daily allowance flight for a rodent will be approximately peer to two years’ stay in space for us. Using the similar principles, we estimate consequences for the person, using data which we obtain on biosatellites. And besides, the flight duration record makes one and a half years today.

Besides, there is an essential difference between animals and astronauts – the last activly battle against negative impact of zero gravity on their organism, and animals immediately are “in” this zero gravity, and they have no prophylaxis. And therefore what we see in animal experiments on the person we can’t often see because these effects are stopped by those agents which we develop in order that astronauts could return to Earth healthy.

Therefore researches on animals are also important for us – with their help we can see those effects which we partially see also in a human body, but we don’t understand their depth.

— Whether you find possible reconstruction of a greenhouse on the ISS and if yes, as far as it is important for the Russian space science in the context of possible lag from China and the USA and for progress in creation of bioregeneration systems for flights in distant space?

— Speaking at a conference, I not for nothing told that we are in a dangerous situation now, one may say, that we eat up today the last achievements which were received in the Soviet Union 40 years ago.

In general, the problem of existence of the person out of the biosphere is very difficult and complex question which can’t be reduced to any specific objective — it is impossible just to take and tell that we need to frame a life support system for lunar base, or for the Martian ship.

The matter is that the biosphere of the planet has huge buffer capacity – we are surrounded by the air and water ocean, and huge mass of the soil and rocks. We throw out now a huge amount of Carboneum which was saved underground millions and billions of years as a result of work of biological systems. Just now we began to notice some changes though also it isn’t absolutely clear whether they are bound to these actions of mankind.

To what I tell all this? Biological systems are much broader, than one greenhouse which is an oxygen source. Therefore for us loss of “Lada” is very offensive thing. Will try or won’t try we it to restore, it will be possible or it won’t be possible to make it – other question.

All this doesn’t cancel that experiments with plants will continue all the same. Plants can play different roles in human life in space – they can be sources of vitamins, help crew from the psychophysiological point of view. For example, the crew of our Mars-500 project had an opportunity to grow up either flowers or salad in a greenhouse. The analysis of how all these factors influence human life, is crucial for us.