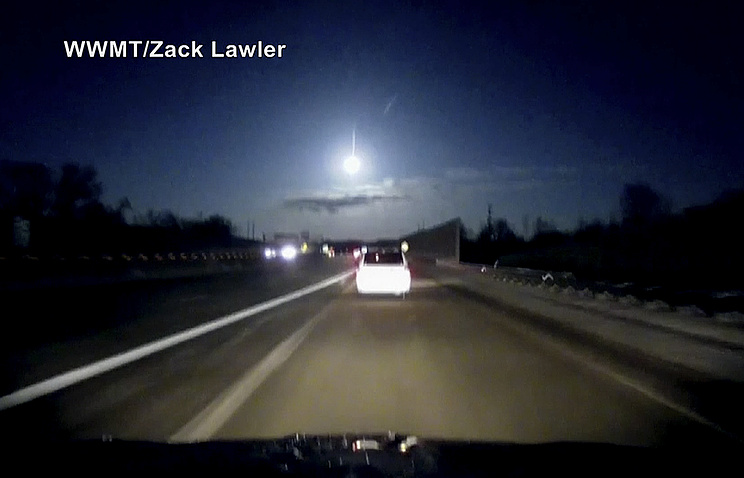 The meteor, whose fall attracted the attention of many residents of the city of Detroit (Michigan) on Wednesday night, fell apart after entering the dense layers of the Earth’s atmosphere. The subsequent explosion reached a power of 100 tons in trotyl equivalent, the meteoroid control of the NASA Space Flight Center in Huntsville, Ala., Said on Wednesday.

The Office clarified that the trajectory of the fall of the cosmic body was determined on the basis of visual observations of eyewitnesses, brought together by the American Meteor Society. “Our analysts came to the same conclusions: We calculated that this meteor moved at a very low speed – only 45.06 thousand km / h (12.52 thousand m / s) .This fact together with the brightness of the phenomenon pointing to the body size – at least 0.91 m across, shows that the object penetrated deep into the atmosphere before it fell apart, “the US space agency department said on Facebook.

As NASA chief scientist Bill Cook said, the 100 ton explosion in TNT equivalent caused a shock wave and a thunder that alarmed and frightened many residents of southeast Michigan. “Usually the fireballs fall to the ground in the form of meteorites, when the shock wave reaches the surface, then it shakes the ground a little,” Cook continued. He recalled that meteorites are often too small to kill a person, although they can cause minor damage to cars and roofs of houses.

The experts corrected the US Geological Survey, which originally claimed that the meteorites, falling 8 km from the New Haven settlement to the northeast of Detroit, caused an earthquake with a magnitude of 2.0. “Although the phenomenon was assigned a magnitude of 2.0, this scale is used to measure the magnitude of an earthquake and therefore is not an accurate representation of the observations of a meteor,” said geophysicist William Yeck of the National Earthquake Warning Center of the Geological Survey in Colorado.

A natural phenomenon was recorded by numerous surveillance cameras and video recorders on cars. On video recordings that were published in large numbers on the Internet, you can see how a luminous object appears in the sky and explodes after a few seconds. One of these records, downloaded on Youtube, in just a few hours, collected more than 200 thousand views.