The previously unknown structure of immunity was recorded on video 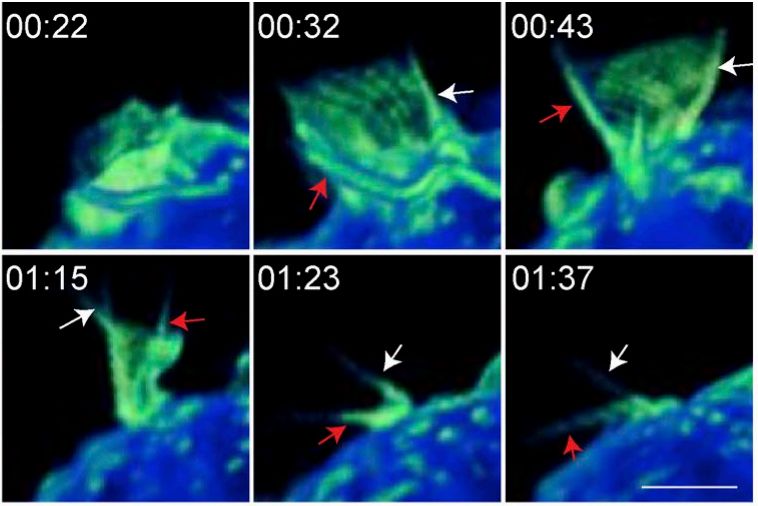 Biologists from Queensland University (Australia), using the method of lattice light microscopy, discovered a structure on the surface of macrophages, which helps to identify toxic particles. The work is published in the Journal of Cell Biology.

Macrophages are leukocytes of animals, including humans, whose goal is to capture and digest cell debris, microbes and other alien or dangerous particles for the body. Lattice light microscopy – a modified version of fluorescence microscopy – made it possible to see them in high resolution. With this quality, scientists noticed on the cells unknown structures, which were called tent-like ruffles (tent-pole ruffles).

The goal of frills is to help macrophages in catching dangerous substances. To do this, they stretch the membrane, which resembles a tent, and catch particles in it: the process is called macropinocytosis – or rofocytosis.


Investigating other types of cells, experts found that macropinocytosis is not only characteristic of the immune system, but also of cancer cells. Thus, cancer cells catch and absorb the nutrients they need to survive. Further study of the tent-like frills and macropinocytosis process will help explain how these ruffles form. If scientists learn to control their work, it will be possible to fight cancer by depriving malicious cells of the ability to feed.

One of the authors of the study Adam Wall (Adam Wall) shared his impressions:

“It’s incredibly exciting to observe the behavior of cells at unprecedented levels of resolution. This scientific achievement, made on the edge of today’s development of microscopy, shows how much we still do not know about the cells and how they function. “