The probe photographed the longest river and canyon on Mars 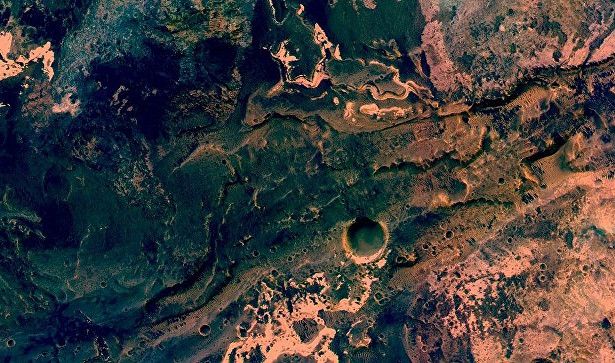 The Russian-European probe ExoMars-TGO transmitted to the Earth detailed images of the main “sights” of Mars, including the longest river and the canyon of the solar system. They were published on the website of the European Space Agency.

The joint Russian-European mission “ExoMars-TGO” arrived to the red planet on October 19, 2016. The orbital part of the mission successfully coped with the task of convergence with Mars and reaching a stable orbit, and landing the demonstration module “Skiaparelli” on the Meridian plateau at the equator of Mars failed.

In addition to solving scientific problems and uncovering the mysteries of the atmosphere of Mars, TGO will also perform another important task – to play the role of a bridge between the Earth on the one hand, and the European rover Pasteur and the Russian landing platform on the other, which will be sent to Mars tentatively in the year 2020.

About a year and a half ago, ExoMars-TGO began a long braking procedure, in which he used the friction produced during passage through the upper atmosphere of Mars, in order to slow himself down and reach the calculated path of work. The braking procedure was completed in late February and now the probe officially began scientific work.

Depression Yus, part of the Mariner Valley, one of the deepest canyons of Mars and the entire solar system as a whole

After studying the structure of the polar caps of Mars, TGO directed the CaSSIS camera to study the largest and most noticeable forms of the relief – the Mariner Valley, the largest and deepest canyon of the planet, and a network of canals about six thousand kilometers long connecting the craters of Holden and Argyra in the temperate latitudes of the southern hemisphere of the planet .

These channels, which the astronomers call the “Uzna Valley” in honor of the old riverbed of the Amu Darya River, which connected the main course of this waterway with the Caspian Sea until the 17th century, when it suddenly died out. Martian Uzboy, as the planetologists today believe, was also the channel of an ancient river, whose length, along with all the tributaries, reached a record eight thousand kilometers.

A little to the north is its no less noticeable “neighbor” – the famous Mariner Valley, a gigantic gorge 4500 kilometers long, 200 kilometers wide and 11 kilometers deep. In size, it is about 10 times larger than the Grand Canyon on Earth, and is inferior only to the recently opened canal system on Charon, the satellite of Pluto.

ExoMars cameras received photos of one of the deepest parts of this valley, the Yus depression, on the walls of which you can see traces of water movement, landslides and other forms of erosion. As some scientists suspect today, rains and other forms of precipitation may periodically flow inside this canyon, generating temporary streams and other water streams.

In addition to these canyons, the Russian-European probe received photographs of two other important regions of Mars, one of which will be studied by its second half, the Pasteur rover. For this role, equally equally claim the Mavrt Valley and the Oxyia Plain, located in the vicinity of the equator of the planet.

New photos of these areas, as the participants of the scientific team of ExoMars hope, will help to choose the most optimal place for landing the rover, which is both interesting for scientists and safe for launching the platform, which is being developed at the Russian NGO named after Lavochkin.