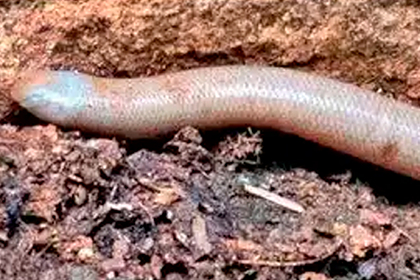 Nature lovers have discovered near the Indian city of Gurgaon, Haryana state, the rarest beak-nosed narrow-necked albino snake. The Times of India reports.

Naturalist Rajiv R. found an adult with a body length of about 60 centimeters.

“This is a beak-nosed, narrow-necked snake. She is albino, so she is not dark brown, but whitish, ”he said.

According to Rajiv, the albino snake of this species was previously only seen in the state of Maharashtra in 2012.

Representatives of the Department of Wildlife Conservation said that the found individual is blind and harmless. “Very little information is known about their lifestyle, behavior and population,” said a senior department officer from Gurgaon.

Earlier it was reported that a female giant gray kangaroo gave birth to an albino cub at the Panorama Garden Estate on the Mornington Peninsula in Australia. The kangaroo had no pigmentation of hair, eyes and skin and was completely white.