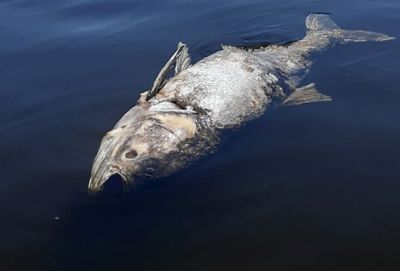 The reason for the mass death of fish off the coast of Mauritania in the last two weeks was a decrease in the concentration of oxygen in the water in the areas of the Atlantic Ocean adjacent to northwestern Africa. This was reported by the local radio station SABC, citing research by Mauritanian scientists.

Biologists were urgently sent to the coastal area between the capital of Mauritania, Nouakchott and the resort town of Tanit, located 60 km away. In September, millions of dead fish were washed ashore in this part of Africa. The authorities, concerned about the potential for chemical contamination of the water, have turned to the Mauritanian Institute for Oceanographic and Fisheries Research (IMROP) for help.

“We found that 99% of the total dead fish caught on the coast is one species, this is the mullet,” said Abdul Diah, research participant and head of the IMROP Marine and Coastal Environment Laboratory. “No chemical effects on fish that could cause their mass death was not found. ”

According to Mauritanian scientists, the mullet fell victim to a lack of oxygen in the water due to the high temperature of the latter. “We are going through a hot hydrological period, when the water temperature off the coast of West Africa reaches 33.34 degrees Celsius and remains at this level for a long time,” said Abdula Dia. “As a result, some fish species, in particular the mullet, feel an acute lack of oxygen.”

The current mass fish kill off the coast of Mauritania is not unique. Similar events were noted in 2005 and 2017.