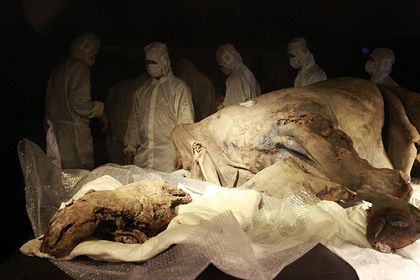 In Siberia, the remains of a woolly mammoth that lived during the Ice Age were found. The carcass of the animal is well preserved thanks to the permafrost. Valery Plotnikov, the leading researcher of the mammoth fauna research department at the Academy of Sciences of the region, spoke about this.

It is noted that the body of the animal is better preserved than previously found specimens of this species. Plotnikov stressed that the find contains all the limbs, part of the internal organs and a horn. “A small nasal horn has also survived – this is a rarity, as it decomposes rather quickly. The research revealed traces of wear on it, that is, the rhinoceros used it actively for food, ”the scientist explained.

He added that soft tissue was found in the back of the torso – possibly the genitals and part of the intestines. By examining the animal’s excrement, scientists will be able to restore the paleoenvironment of that period.

Plotnikov also said that the rhino was three to four years old, that is, he was a teenager: he had already switched from lactation to plant food, but continued to live with his mother. He died, according to scientists, having fallen into a hole or ravine.

American scientists have previously established that woolly mammoths on Wrangel Island in the Arctic have become extinct due to hereditary diseases formed against the background of a lack of genetic diversity.