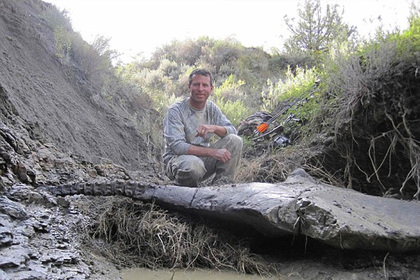 American hunter David Bradt (David Bradt) accidentally found the remains of a “relative” of the Loch Ness monster with an extraordinarily short neck – an elasmosaur that lived about 70 million years ago.

One of the authors of the article, Patrick Druckenmiller (Patrick Druckenmiller) from the University of Alaska Fairbanks, said that representatives of this species of reptiles had up to 76 vertebrae. The found skeleton counted about 40 vertebrae, and it amazed specialists.

Druckenmiller noted that the remains of the sea lizard were found in November 2010 in the northern part of Montana, when Bradt was hunting large game. Initially, the hunter assumed that he had found a skeleton of triceratops, since they are often found in the northwest of the USA.

Removing the remains of scientists took three days, and only after that it was possible to understand that this is a new kind of elasmosaurus. Unlike the other elasmosaurs, the length of his neck is only slightly more than two meters. The reptile was named after a hunter and a tribe of indigenous Indians – Nakonanectes bradti.