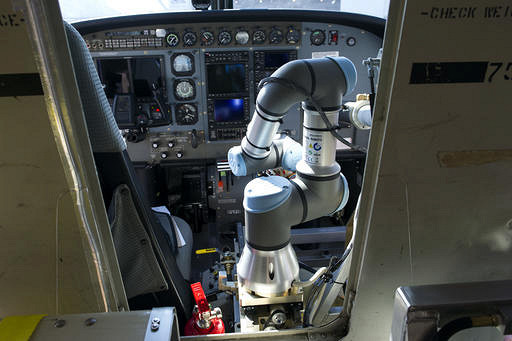 In the United States, new tests of the ALIAS system have been carried out, which is capable of turning any aircraft into an unmanned vehicle. Developed by Aurora Flight Sciences robot successfully landed a Boeing 737-800NG airliner. True, he did it while on the training simulator, the press service of the company reported.

The tests were conducted in conditions close to real. A situation was simulated whereby the pilot suddenly lost the ability to fly an airplane. Robot ALIAS, who performed the role of co-pilot, took control of himself and managed to carry out the remainder of the flight and landing.

Order for the ALIAS system scientists received from the US Defense Advanced Research Agency. Requirements for the project included the rapid installation of the device in the cabin of any aircraft without major changes in its design. A robot consisting of a computing device, several high-resolution video cameras and a complex manipulator can be controlled from a tablet device, while also perceiving voice commands.

ALIAS can act as an insurance for the interception of control, help the main pilot or lead the aircraft on their own.