The robot with human touch 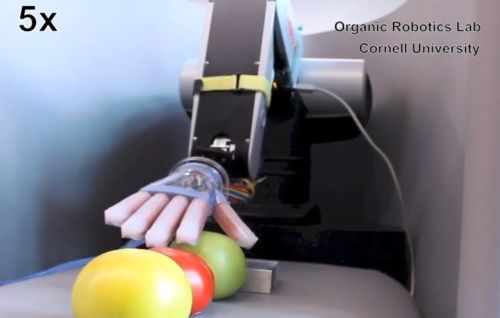 Robotic technologies from Cornell University provided a robohand with soft fingers which can experience, an object which it concerns is how soft.

The group of robototekhnik under the leadership of professor Robert Shepard published operation in which the method is described to use flexible wave guides as sensors of a bend of a surface, its stretching and pressure in a myagkotkanny robohand.

“The majority of similar robots “feel” a surface by means of the sensors located outside. And at our robot sensors are built in in tissue of fingers and make with it a single whole therefore they are capable to determine pressure which arises in robofingers when clicking an object, absolutely as it is done by human hands” — one of authors of development, Huichan Zhao explained.

Sensors of the kornellsky robot — optical. They are made of the flexible materials installing electrical equipment by means of a 3B-lithograph: in some places construction joins LEDs and photodiodes — the devices transforming light getting on them to an electric current.

The robohand material compression is stronger, the it is more than loss of light radiated by LEDs in it. Photodiodes fix loss of light on certain directions and define a compression ratio. As a result so sensitive system turns out that the fingers made on this technology are capable to define the ripest and soft tomato from three offered.