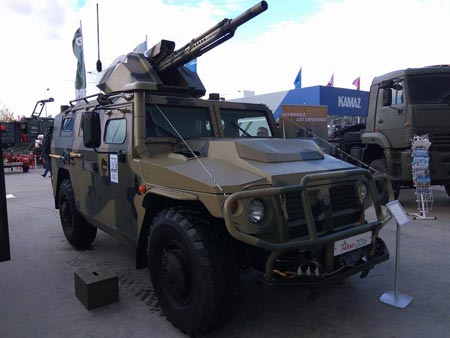 The Russian army until the end of 2016 will have to adopt 20 new attack robots Uranium-9. The troops will put five sets of multifunctional robotic system Uranium-9. Each set consists of four combat vehicles with the robot or robot fire support, one mobile command post and two of the tractor.

Photo: the unmanned modification of an armored vehicle equipped with 30-mm automatic cannon, a 7.6 mm machine gun and can remotely operated at distance up to three kilometers. “Tiger-M” will be able not only to move and shoot, but also to automatically find and follow the target.

The robot is equipped with armor that weighs around ten tons, can operate at distance up to three kilometers from the operator. It can operate both autonomously and by remote control, notes the company subordinated to the defense Ministry 766th Management of production and processing equipment, developed the machine.

The robot is resistant to modern means of electronic warfare, but in the case that communication with the operator is interrupted, he will be able to act autonomously. While the robot himself is unable to fight, as yet not worked out the algorithm of target recognition friend or foe, but the designers are working on it.