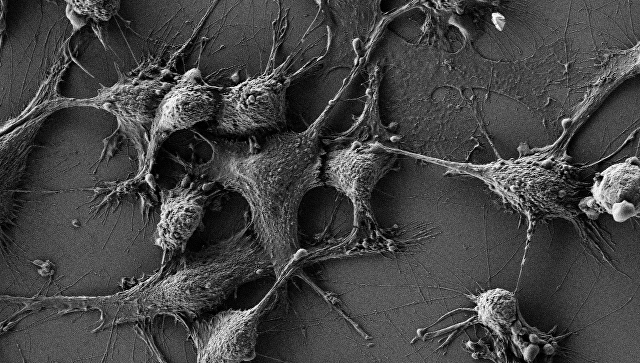 Scientists from Institute of theoretical and experimental biological physics of RAS found out that nanoparticles from dioxide of cerium are capable to protect an organism of mice from fatal doses of radiation.

“These nanoparticles can probably influence different intracellular signal ways connected to DNA restoration. If it is damaged slightly, let us assume, only one thread is broken off, then DNA polymerases can recover a molecule. In the cell systems of neutralization of the ionizing radiation and restoration of damages are put, and nanoparticles help these processes” — Anton Popov from Institute of theoretical and experimental biological physics of RAS in Pushchino whose the press service of an institution quotes declared.

The person and other living beings extremely negatively react to radiation by radiation for the reason that the ionizing radiation directly enters gaps to chains of DNA or indirectly “breaks” them, generating a set of chemically aggressive substances in case of interaction with cell contents. These damages force many cells to read that they is irreversible are damaged that causes their mass loss and leads to organism death in general.
Popov and his colleagues from the Moscow institutes of RAS and university of Tomsk found out that a part of these effects can be suppressed or even completely to prevent if at the irradiated cells there is a quantity of the nanoparticles consisting of oxide of cerium (CeO2).

As scientists tell, on the idea to make similar experiments them the fact that powders from oxide of cerium have anticorrosive properties pushed, and nanocrystals from dioxide of this metal noticeably reduce concentration of hydrogen peroxide and other aggressive molecules in water solutions of different substances after their radiation by X-ray.

Being guided by this idea, biologists checked what will happen to cells of mice if to enter nanoparticles of dioxide of cerium into them and after that to irradiate them with a lethal dose of radiation. It turned out that such cells perished twice less than their “cousins” from a check group who aren’t sated with nanoparticles.

Having convinced that cerium dioxide really protects cells from radiation, Popov and his colleagues entered them into an organism of mice, irradiated them with a dose in 7 Gray of the ionizing radiation, fatal both for rodents, and for the person. A part of mice received injections of nanoparticles after radiation.

As showed this experiment, in 15 days all individuals from a check group perished from radiation consequences whereas about 40% of their relatives to whom scientists entered nanoparticles after radiation survived by then and didn’t die still at least for a month of observations. The mice who took injections of nanoparticles beforehand coped with radiation even better – more than a half of them (60%) endured this procedure.

As scientists consider, it occurred for the reason that nanoparticles of dioxide of cerium got into the most vulnerable parts of an organism including marrow where they took free radicals and transferred them to connections, safer for cages, in time and after radiation. Popov and his colleagues consider that nanoparticles can perform one more protective function – perhaps that cerium dioxide, absorbs radiation in itself, thereby minimizing harm to an organism.

Successful results inspired authors of article to continue work. Now they are going to research in detail, how exactly nanoparticles of dioxide of cerium help to recover DNA damaged by radiation. Besides, they are occupied by a question of how long nanoparticles can be in cages how are removed and as their stay influences an organism. These questions are extremely important for assessment of safety of similar protection against radiation.