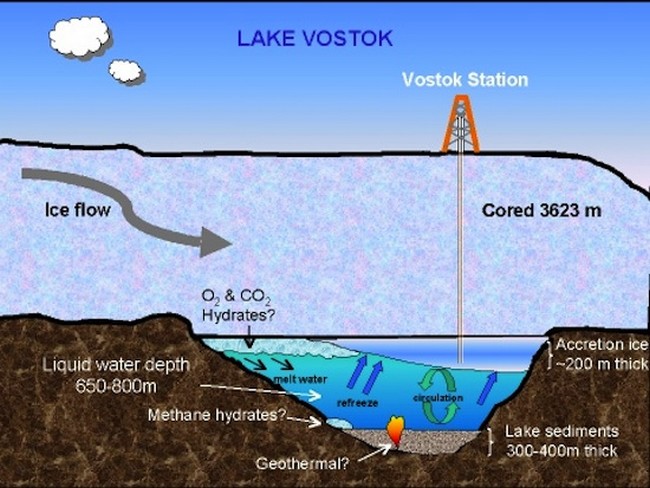 The Russian scientists plan to use robots for a research of water thickness of the subglacial lake East in the central part of Antarctica. Reported about it on Thursday at a scientific and practical conference “the Lake East. Achievements and prospects” head of the department of well-drilling of Mining institute and developer of drilling equipment Nikolay Vasilyev.

“There are ideas on use of robots for inspection of the lake East. But it is only schematical decisions so far”, – he noted.

According to Vasilyev, achievement of a bottom of the lake located under four-kilometer thickness of ice is possible “in about five years in case of necessary financing”. According to Vasilyev, “it is desirable to make the superficial overview of lake waters”. Uniqueness of the lake is that its surface rests against a massive glacier and isn’t reported with a surface with the atmosphere.

By Nikolay Vasilyev’s estimates, creation of the research equipment for inspection of the lake will demand investments in the amount of “100-300 million rubles”. “Such level of complexity and uniqueness of work inadmissibly messages at the technological level of the 1980th years. The equipment shall correspond to uniqueness of our researches. It shall be the modern equipment”, – he is sure.

Vasilyev told that in this season equipment prototypes will be tested.

Nikolay Vasilyev told about creation of the equipment by means of which scientists broke through a four-kilometer ice layer to the relic lake.

“Practically all equipment is created in experimental workshops of Mining institute”, – he reported. Scientists were faced by a task to develop the drilling rig which would give a core of the same diameter, as well as in case of oil drilling, but the smaller weight having much and a need for the electric power as it is physically impossible to deliver the standard drilling rig in the central part of Antarctica. It weighs hundreds of tons and 1000 kW of the electric power consume.

As a result in Mining institute created the installation weighing 35 tons consuming 40 kW. “We had unique masters – that you will draw, will issue to you”, – Vasilyev told.

According to him, everything, except for casting of copper crowns, the boring building and sledge for it created in workshops Mountain, and these three line items – at the entities of Leningrad-St. Petersburg. Work went since 1967, in 1970 the special laboratory was created. Vasilyev came there in 1978.

“We were 40 people. A part regularly went to Antarctica on winterings, another developed the equipment”, – he noted.

The East station – one of the most extreme places on Earth. Normal air temperature constitutes minus of 55 degrees here, the absolute temperature record – minus 89,5 degrees Celsius is set here. “I only once observed minus of 13 degrees”, – Vasilyev who visited the station a set of times told. But low temperatures – not the most terrible, according to Vasilyev, “it is possible to get used to them and practically it is always possible to hide in heat”.

Low pressure which constitutes 400 mm of a mercury column and the rarefied air is much more difficult transferred. “It is felt as highlands in 5 thousand meters. If you arrive to the east by the sled and caterpillar train, adaptation takes place gradually and therefore it is easier. And if you arrive by plane – day rub better not to make sharp movements, not to transfer weights – simply to get used. For the 10th day it is already possible to work normally”, – he told.

It was most difficult that who had to reactivate the station – and it occurred twice. Because right after the plane it was necessary to transfer products to heat and to recover an electrical wiring after idle time.

At a conference fragments from yet not finished Ekaterina Eremenko’s movie about penetration into the lake East were shown. Action happens in underground ice catacombs. As Vasilyev told, they are cut through in ice by means of a saw. There are a lot of specialized rooms and rooms.

And once in operating time of the 49th Russian Antarctic expedition the station commander didn’t calculate a petrol consumption, and month to all winterers it was necessary to do without electricity. They were forced to gather in one room around a small tile on which prepared and from which were heated.
Obstacles in a way to the lake

According to Nikolay Vasilyev, having drilled a well to the lake on depth of 2500-3000 meters, scientists faced the unclear phenomenon – work clogged. “We lower a boring shell, it begins work and right there stops. We take out – there are no damages”, – he remembers.

Laborious work on comparison of all conditions of drilling helped to find an answer. At this depth the size of crystals of ice changes. It becomes from fine-grained (2-3 mm) coarse-grained and its destruction happens differently, than fine-grained ice.

There were also technical breakdowns, accidents. More than once in a well it was necessary to leave boring shells and to make a new trunk slightly sideways from emergency. As a result to the lake conduct the whole heels of wells. Penetration into the lake is made twice on February 5, 2012 and on January 25, 2015.

Now separates from about 74 meters of the frozen lake water penetration into the lake of scientists. It is ice it is possible to razburit for one season.

Nikolay Vasilyev has noted that process of drilling and the cores (ice columns) received from different depths for science have huge value. “Ice is formed of snow. He gradually hardens, but continues to store in himself tiny vials of air with a certain gas structure, dust, pollen, microorganisms. Having analysed consistently taken cores and having compared their composition of ice with age, we will be able to reconstruct climate”, – he has noted, having added what already much in this direction is made by the Russian scientists.

Detection of bacteria in the lake East – not single that already happened, and mass can confirm a hypothesis of a life origin on Earth at the expense of her drift with comets. “If in the subglacial lake without message with the atmosphere in extreme conditions life can remain that means there are live organisms capable to long anabiosis which can be carried by comets”, – he has explained.

The lake East is the latest large geographical discovery. It lies under a four-kilometer ice layer in the central part of Antarctica. Its volume, by calculations of the Russian scientists makes about 6 thousand cubic kilometers. Drilling operations for the purpose of achievement of border ice – water are conducted since 1989.

Twice – in 2012 and in 2015 the Russian scientists have got into the lake, calculation of pressure in the lake has helped to exclude a drift in him technical liquids. Seasonal works this year will take place from December 6 till beginning of February.