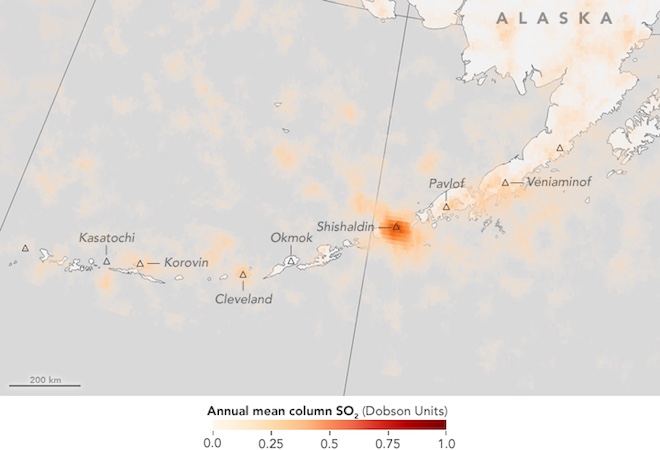 Volcanoes erupt, spitting out ashes and rocks. On their slopes are descending and lava, and landslides. Such eruptions are significant, but chaotic. Less intense, but important volcanic process – constant quiet gas emissions. A number of volcanoes around the world are constantly emitting water vapor with the addition of heavy metals, carbon dioxide, hydrogen, sulfides and sulfur oxide. The simplest of them for detecting from space is sulfur oxide.

In a new study, a team of scientists reported on a new global inventory of emissions of sulfur oxide from volcanoes. The data on emissions from the “Aura” satellite were collected, then the researchers formed annual emission estimates for 91 active volcanoes around the world. The maps presented above and below describe the emissions of volcanoes in the Aleutian Islands and the islands of Indonesia. 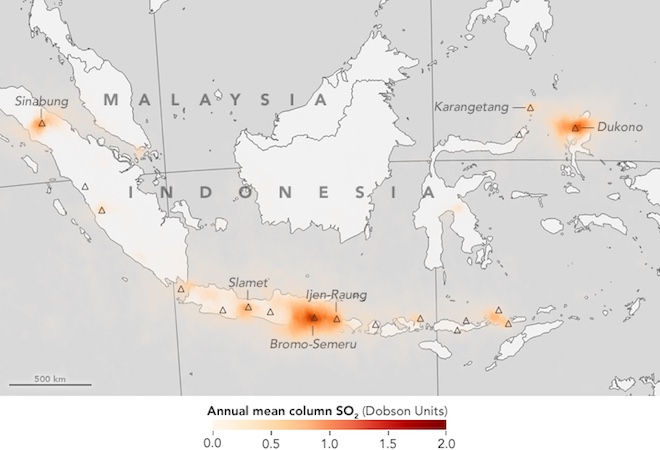 “Many people do not understand that volcanoes constantly allocate large volumes of gas and can do so for decades and even centuries,” says volcanologist Simon Karn of the University of Michigan, the lead author of the study. – Since daily emissions are smaller than a large eruption, the effect of a single jet is imperceptible. But the cumulative effect of the daily emissions of all volcanoes can be significant. In fact, on average, volcanoes release most of their gas when they do not explode. ”

The new information will help to make climate and atmospheric models more accurate and learn more about the risks to human health and the environment.

Surveillance of sulfur oxide emissions will also help with the prediction of eruptions. A noticeable increase in SO2 emissions usually precedes volcanic eruptions.