The Schrodinger cat helps to explain the riddles of life 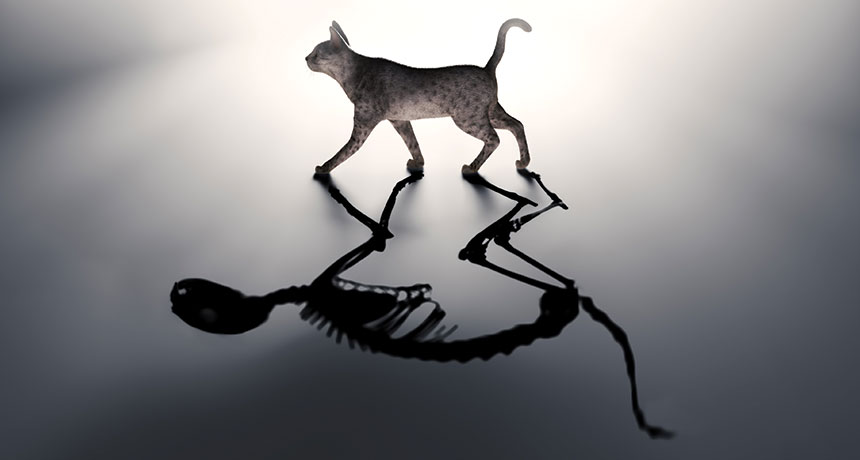 Austrian physicist Erwin Schrödinger in the middle of the last century first tried to explain the phenomenon of life with the help of quantum mechanics. Now enough data has accumulated to build hypotheses about how quantum effects arise in the body and why they are needed there. RIA Novosti tells about the latest achievements of quantum biology.

The Schrodinger cat is more likely to live

In the book “What is life from the point of view of physics?”, Published in 1945, Schroedinger describes the mechanism of heredity, mutations at the level of atoms and molecules through quantum mechanics. This contributed to the discovery of the structure of DNA and encouraged biologists to create their own theory, based on strict physical principles and experimental data. However, quantum mechanics is still outside its framework.

Nevertheless, the quantum direction in biology continues to develop. His followers are actively looking for quantum effects in the reactions of photosynthesis, the physical mechanism of the sense of smell and the ability of birds to feel the Earth’s magnetic field.

Plants, algae and many bacteria draw energy directly from sunlight. To do this, they have unique antennas in the cell membranes (light-harvesting complexes). From there, a quantum of light enters the reaction center inside the cell and triggers a cascade of processes that eventually synthesize the ATP molecule, the universal fuel in the body.

Scientists pay attention to the fact that the conversion of light quanta is very effective: all photons fall from the antennas into the protein-based reaction center. There are many ways to go, but how do photons choose the best? Maybe they use all the ways at once? Hence, it is necessary to allow the imposition of different states of photons on each other – quantum superposition.

Experiments were carried out with live systems in tubes excited by a laser to observe quantum superposition and even a certain “quantum beat”, but the results turned out to be contradictory. 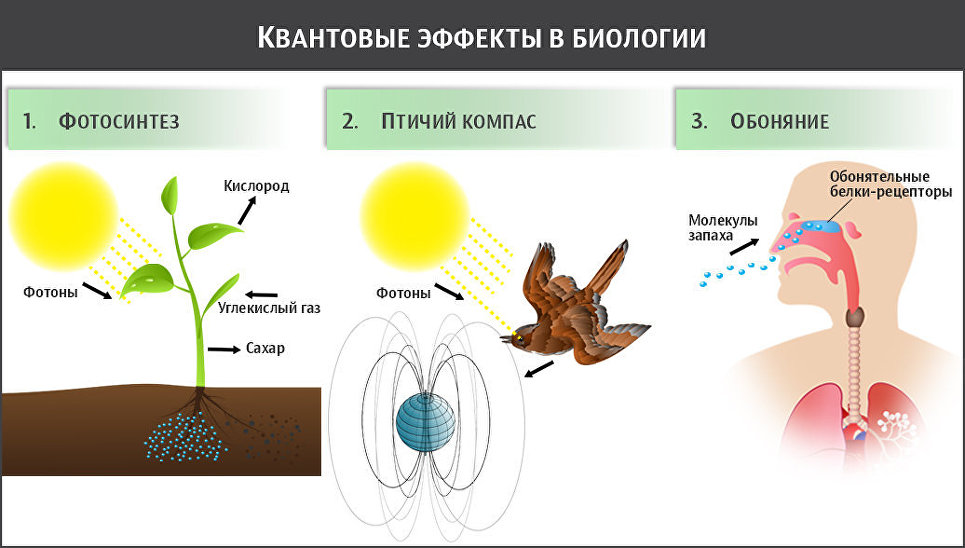 Bird’s Compass
A bird called the “Little Godparent” makes a non-stop flight from Alaska to New Zealand through the Pacific Ocean – 11 thousand kilometers. The slightest mistake in the direction would cost her life.

To explain the unique navigation abilities, scientists put forward the hypothesis of an integrated bird compass, which is particles of magnetite in the body.

According to another point of view, there are special receptor proteins on the retina of the bird’s eye, which are switched on under the influence of sunlight. Photons knock electrons out of protein molecules, turning them into free radicals. Those acquire a charge and, like magnets, react to a magnetic field. Its change is capable of switching a pair of radicals between two states that exist as if simultaneously. It is assumed that birds feel the difference of these “quantum jumps” and correct the course.

A man discerns thousands of odors, but the physical mechanisms of the sense of smell are not fully known. Getting on mucous, the molecule of an odorous substance meets a protein molecule, somehow it recognizing and sending a signal to nervous cells.

There are about 390 types of human olfactory receptors that combine and perceive all possible smells. It is believed that an odoriferous substance, like a key, opens the receptor-lock. However, the smell molecule does not change chemically at the same time. How does the receptor identify it? Apparently, he feels something else in this molecule.

Scientists have suggested that electrons tunnel (pass energy barriers without additional energy) through the molecules of odor and transfer some information code to the receptors. Attempts of appropriate experiments on fruit flies and bees have not yet yielded distinct results.

“The behavior of any complex system, in particular a living cell, is determined by microscopic processes (chemistry), and such processes can only be described by quantum mechanics.” We simply have no alternative. “Another question is how effective this description is today.” Quantum mechanics of complex systems is called quantum informatics – while in its infancy, “- commented RIA Novosti Yuri Ozhigov, a member of the Department of Supercomputers and Quantum Informatics at the Faculty of Computer Science and Computer Science of the Moscow State University named after MV Lomonosov.

The professor believes that progress in quantum biology is hampered by the fact that modern physical instruments are sharpened on non-living objects, experiments on living systems can be problematic with their help.

“I hope these are temporary difficulties,” he concludes.