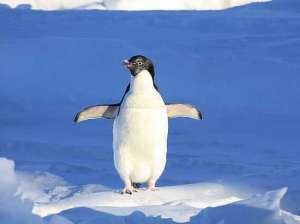 Far ancestors of modern penguins were the flying birds, however already 60 million years ago penguins weren’t able to fly. About why these animals have refused from so, apparently, valuable skill, and also the American biologist Daniel Ksepka from Bruce’s Museum in Connecticut has told about other similar “strange” turns of evolution.

As the expert has told, penguins still keep the lines inherited from the far flying ancestors — a specific structure of the top extremities and a thorax, special muscles of wings, feathers and so on. However, according to scientists, ancestors of modern penguins have ceased to fly shortly after large dinosaurs have died out. Ksepka has noted that he considers refusal of penguins of flight “huge break during their evolution”. Having lost an opportunity to rise in air, birds could increase in sizes. Wings of their steel short, but rigid and very well suitable to row with them. Muscles of birds have also grown. All this has allowed penguins to feel much more cozy in water — to dive, spend more time under water more deeply, to float and hunt rather large catch quicker. From this the biologist draws a conclusion that exactly inability has given to fly to penguins the chance ideally to adapt to conditions of own dwelling.

It is curious that not all evolutionary changes such have so accurate explanation, National Geographic reports. For example, scientists still not up to the end understand why today any bird on Earth has no teeth though in the past dinosaurs from whom these birds have occurred possessed teeth. As one of assumptions experts the thought moves forward that the beak can weigh simply less, than teeth, and for flight the question of weight is one of key. It is curious that as show some researches, “transformation” of teeth into a beak hasn’t demanded from birds of considerable changes at the genetic level — having only a little changed genes at embryos of chickens, experts observed how at those teeth began to be formed.

Among other “victims” on which during evolution there were these or those organisms scientists call deterioration in sight at beings, centuries from generation to generation living in constant darkness, and also “refusal” of snakes of paws which their ancestors possessed.