The secrecies of petroglyphs of Kimberley in Australia 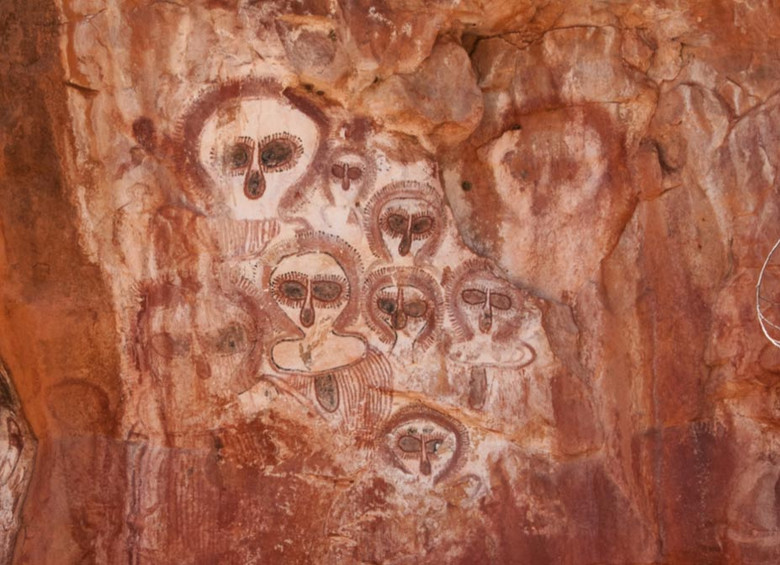 Mountain chains of Kimberley were stretched across all northwest tip of Australia. Throughout many centuries these uncomfortable and sparsely populated places serve as the house for several tribes of the Australian natives — unambat, an uorror, нгариньин and others.

Here, on the plateau Mitchell and in valleys of the rivers Glineldzh, Prinze Regent and the King Eduard, in 60 — 80 miles from the ocean coast, in the places covered from human eyes, in rocks and in numerous caves, ancient sanctuaries of these people — the ritual places visited, as a rule, only by old men to whom the tribe has assigned duties of communication with spirits are concealed. 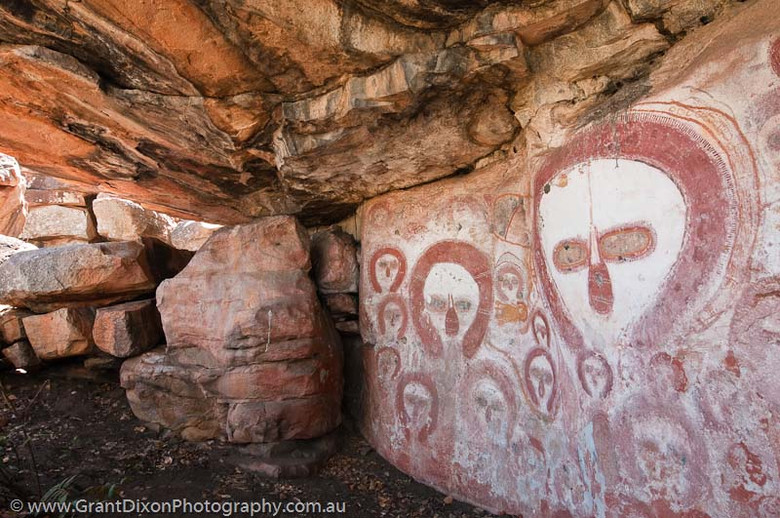 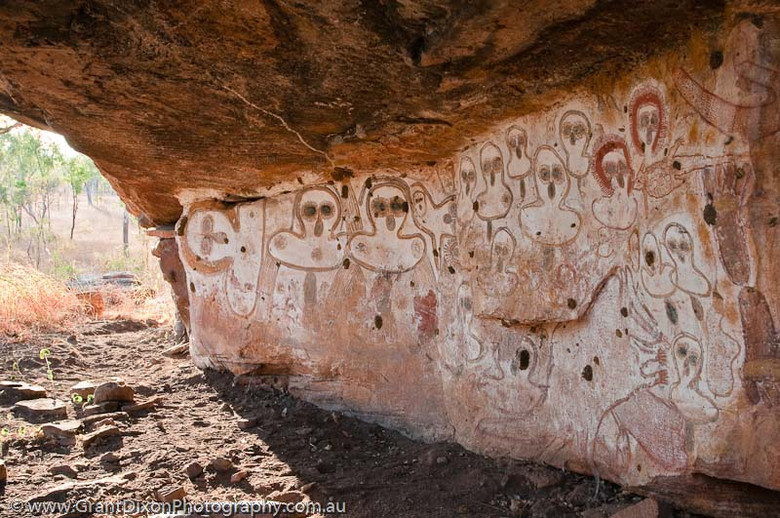 These rocks and walls of caves are painted with surprising drawings, many of which contain hundreds, and even thousands of years. Among them it is often possible to meet images of the mysterious, deprived of a mouth beings with big round eyes. As a rule, they are dressed in long clothes.

Their stiffened white faces are similar to masks. Hands and legs are worked out poorly, often they are hardly planned and almost merge with the light, here and there shaded case. On a breast necklaces are written occasionally out, but more often the subject which is usually interpreted as heart or a chest bone is represented an oval form.

The heads are surrounded with the strange horseshoe or arc-shaped aura which is very reminding nimbuses at Christian Saints. In the top part of pictures sometimes it is possible to see the mysterious signs reminding some east letters.

Sacred for natives of Kimberley, these images will be read by them as images of mysterious powerful beings which but times of an extreme antiquity came to these regions. They taught local inhabitants to use tools and weapon, gave them breeding laws, ceremonies and customs, after completion of the mission left — one on heaven, others under the earth.

These mysterious beings called themselves by vondzhina. Today’s natives call so spirits of water.

The oldest person in the tribe or in group of hunters has for giving annually to rewrite Vondzhina’s images before the period of monsoons. The picture is updated on an old contour, completely keeping all details of the former drawing. Updating of images, according to beliefs of natives, causes a rain. Natives believe that when the image is erased and Vondzhina disappears, then there come the drought and hunger. 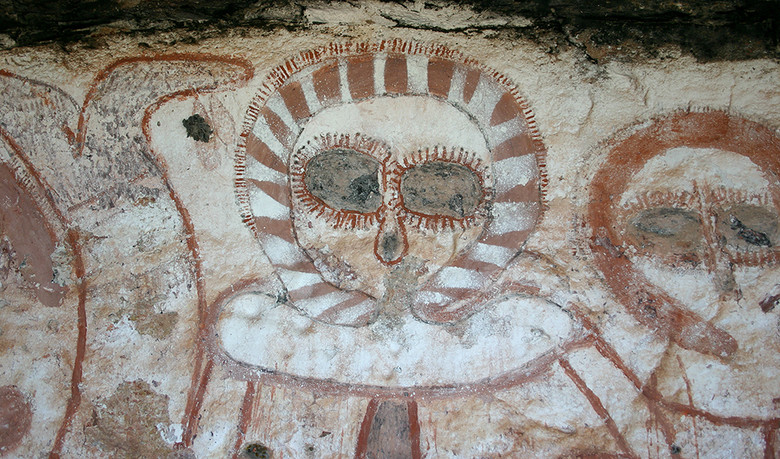 Vondzhina — a part of everyday life of the tribes for many years hunting in the mountains of Kimberley. Vondzhina is represented not only on rocks and walls of caves, but also on cradles of newborn babies, on ceremonial boomerangs and boards, on a myriad of various mascots, amulets and other symbolical hand-made articles.

But at the same time natives are sacredly convinced that the first images made… not they. Authorship belongs to certain mysterious people of other race who lived here many years ago and disappeared it is unknown where.

For many decades anthropologists and ethnologists puzzle over an origin riddle. Many assumptions were stated in this respect.

The hypothesis that vondzhina are newcomers from space looks the most exotic. According to authors of the version, specifies obviously “extraterrestrial” shape it and the strange aura around their heads which is very reminding spherical helmets of astronauts. Supporters of the theory of “paleovizit” warrant that figures are images of aliens.

There are also other hypotheses in this respect. The main problem consists in what can’t even be determined approximately how long to the rocks of Kimberley the first images appeared: it could occur also two hundred, and two thousand years ago.

The Australian natives live only in two temporary measurements: for them there are “primitive times”, or Creation times when there was all live on Earth, and the present. There is no past, and the future doesn’t interest them. Natives have no account of years too: their language has numerals “one”, “two” and “three”, and the term “many” is already applied to a numeral “four”.

Natives carry out accurate distinction between works of art which they consider own, and that which belong to the Creation era. воджин they refer images to the second category and the don’t consider though they took the responsibility regularly to renew them in the ritual purposes.

Tribes of Northern Kimberley have a legend that ancestors of their family clans arrived to Australia by boats led by the people who were called Vondzhina though each of them had an own name. These newcomers from overseas drew the symbolical images in adits and on the surface of rocks. When vondzhina left these places, they left under the earth, having left prints of the legs on a stone.

At legends of natives clearly there are quite real circumstances of receipt and leaving: boats by which they came and, perhaps departured; weapon and tools which they trained to use natives. What hides under itself this layer of ancient legends? 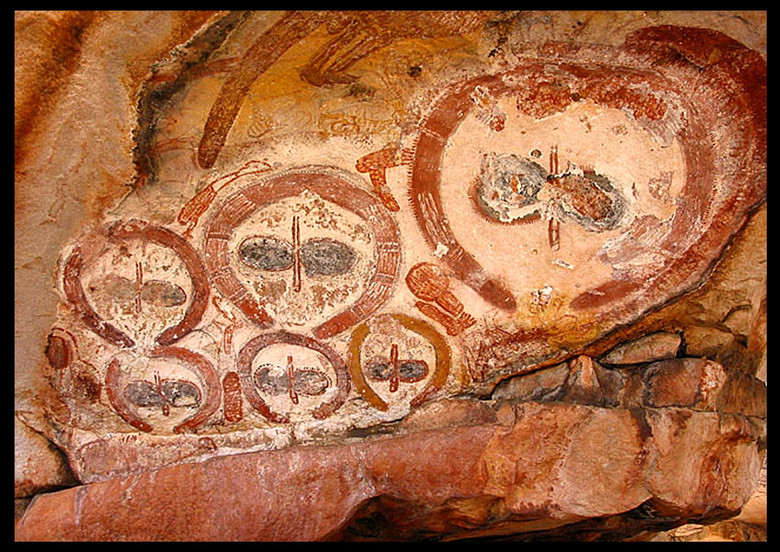 In the 1930th the first researchers of petroglyphic lists of Kimberley assumed that the history of seamen from the Old World or Southeast Asia which is salvaged after the crash of the ship which occurred several centuries ago could be realized in an image.

It is quite possible that on the northwest coast of Australia some time there was a tiny colony of seamen, castaway — Europeans or Malayans. It it is difficult to guess destiny — can be, they left the Green continent or maybe were exterminated by natives.

After them there were only strange petroglyphic pictures in which natives tried to comprehend the historical experience of communication with people got by them other, more advanced of race and to build in it system of the outlook and mythology. So Vondzhina’s image was born…

In attempts to shed light on the secrecy of mysterious drawings researchers found out that the clothes similar to attires, are worn by inhabitants of the northeast islands of Indonesia — Syau and Sangikhe located to the North from Sulawesi. And it is far to the South from Kimberley, in riverheads Gascoigne (Western Australia), G. Giles met a small small group of natives who had obviously Asian lines.

Similarity of attires and clothes of inhabitants of some Indonesian islands, presence of Asian (Malayan) lines at separate groups of natives — all this, apparently, specifies the direction in which it is necessary to move to find a solution of a secrecy of drawings of Kimberley.

However some researchers offer one more version of an origin mysterious. In their opinion, the long attires reminding cassocks and shine around the heads of these mysterious beings occur… from Christian icons!

The Christianity came in Southern, and then to Southeast Asia already in quite early times. In the VIII—XIV centuries in China, especially in ports of the southern coast, hundreds of thousands of Christians lived, and in the XII—XIV centuries in Zaytuna (Quanzhou) there was an episkopiya supporting communications with Rome.

Perhaps, once at coast of northwest Australia the vessel on which there were Chinese Christians crashed? Or it is an echo of later eras when in coastal waters of the Green continent the Portuguese or Spanish ships appeared? 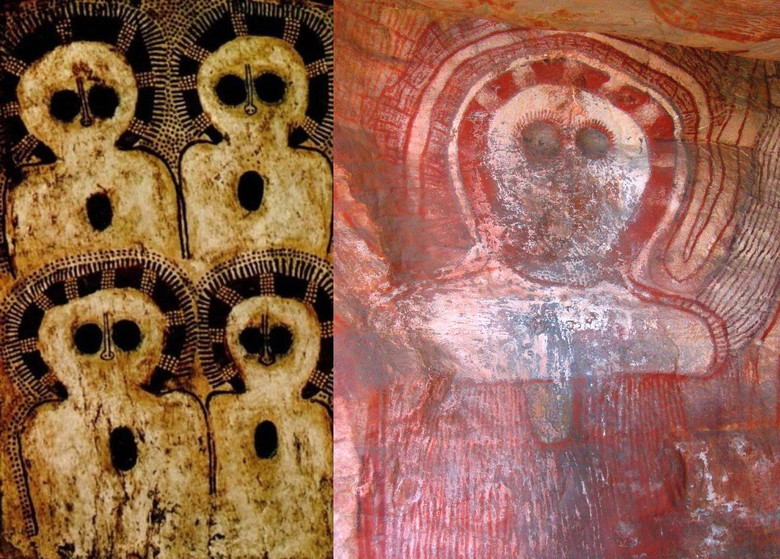 Perhaps, events developed so: several Christians (it is unimportant whether they were Chinese, Portuguese or someone else) on water of circumstances were forced to live several months go years among natives of Kimberley. Perhaps, at someone from them were with themselves an icon, or someone from seamen drew images of Saints on the rock.

Natives with interest watched strange customs of mysterious newcomers. They saw what these people know and Australians are able much more, than; they connected this success with the fertile help of deities unknown to them in long attires and with nimbuses around the head to which newcomers worshipped.

And when foreign people left them — having gone or back to the sea, or simply to a better world — natives began them to worship in imitation to these beings who gradually became a part of their mythology and found new, net Australian lines, having become vondzhina — masters of life and all real…

All this, of course, there is no hypothesis, and the authentic answer to this riddle, but it is obvious that natives of northwest Australia had to face something so unusual once that their mythology forever imprinted this event in image powerful and mysteriou which images from now on became for them sacred.

And whoever were people, the first the created these lists, it is absolutely confidently possible to tell that they weren’t Australians.