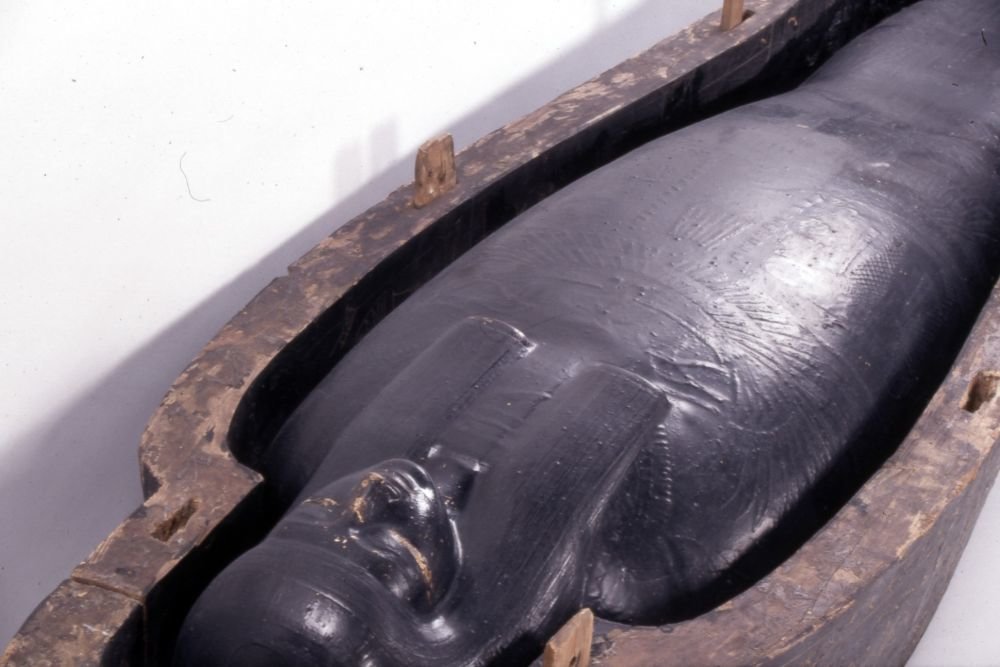 The British Museum has published the results of studies of a mysterious black liquid, which was found in the sarcophagus of an ancient Egyptian priest named Jedhonsiu-eff-ank and other coffins.

In 2018, an unusual black sarcophagus was excavated in Egypt. It was tightly sealed with lime mortar. Inside were the remains of two men and a woman who swam in a strange liquid. She was sent for research.

Now presents the results obtained by a group led by Dr. Kate Fulcher. She noted that black liquid in itself is not a sensation for scientists. Its remains, sometimes in a dried form, were found earlier. In 2018, the interest in the find warmed the unusual black color of the sarcophagus. It turned out that it was covered with a special solution.

British Museum experts have analyzed more than 100 samples of “black slime” from 12 sarcophagi dating from the XXII dynasty of the pharaohs (900-750 BC). Among them was the sarcophagus of Jedhonsiu-eff-ank, who died almost 3,000 years ago. He was a priest at the Temple of Amun in Karnak.

After death, his body was mummified, wrapped in a thin cloth and placed in a case of gypsum and linen. It was beautifully painted with bright colors, and the “face” was covered with gold leaf. The case was placed in a sarcophagus and doused with several liters of warm black sticky substance. It was supposed to freeze and “cement” the case. Then the coffin was covered with a lid and left in the tomb.

The fluid from this and other sarcophagi was investigated using gas chromatography. In a special tube, it was divided into molecules, which then fell into the mass spectrometer. This allowed us to determine the chemical composition.

“Slime” consists of vegetable oil, animal fat, wood tar, beeswax and bitumen, ”writes Fulcher. – There are no exact proportions, they vary in different coffins, but the “slime” was always made from these ingredients. There may have been other ingredients that we cannot detect because they have evaporated or degraded to undetectable levels over 3000 years. ”

Some of the ingredients are found only outside of Egypt, which indicates their import. So, the resin was obtained from pistachio tree and conifers. Previously, amphoras with the remains of pistachio resin were discovered in Amarna, the ancient Egyptian capital from 1347 to 1332 BC. The same resin was found in amphorae on a ship of the same period, which sank off the coast of modern Turkey.

Analysis of amphorae showed that they were made in the Haifa area in modern Israel, where the resin itself was probably collected. As for the coniferous resin, it seems to have been imported from the territory of modern Lebanon.

Egyptians imported bitumen from areas of the Dead Sea. In ancient Greek texts there are descriptions of how people swim to pieces of bitumen floating on the surface of the Dead Sea in order to chop off pieces from them and sell them to Egypt.

Black liquid was used at different stages of the funeral process. She was not only placed inside the sarcophagus, but she was also coated with a case or coffin from the outside. Researchers believe that this tradition was associated with the god Osiris, whose cult was especially popular during the XXII dynasty.

It symbolized death and rebirth. In ancient Egyptian texts this god is often called “black”, and in ancient paintings he is often depicted as a black mummy. When someone died, they said that he had become one of the incarnations of Osiris.

In addition, the Nile was a sacred river. Every year after the flood, black silt remained on the banks, which formed fertile soil, which was considered magical and giving life. In the tombs, archaeologists met clay and wooden forms made in the form of Osiris, which were filled with such silt with sprouted seeds. This also indicates a black connection with the cult of Osiris.