The secret of the voice of an underwater volcano is revealed 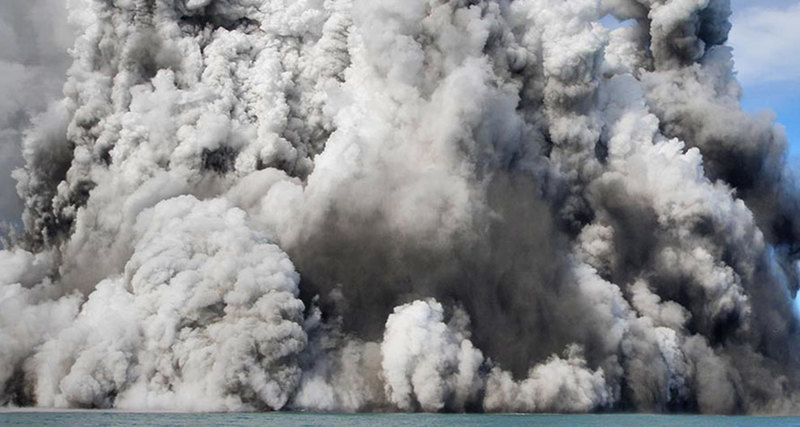 In the ridge of the Aleutian Islands, near Alaska, there is one unusual island, or not at all. As a result of frequent eruptions, the volcano Theologian is sometimes above sea level, becoming an island, sometimes hiding in the abyss, sometimes quite deeply. Now the top of the volcano is 100 meters below water level.

This is an explosive type volcano, and its eruptions occur very often. For 9 months of this year, the Theologian reminded himself 70 times. It has been repeatedly reported from passing ships that large gas bubbles rise from under the water, sometimes with a diameter of about 300 meters, that is, with a modern stadium.

Then a gigantic black dome forms above the site of the underwater eruption, and a strange low-frequency rumble is heard many kilometers from it.

Geologists have installed infrasound microphones at the bottom 59 kilometers south of the volcano. Over 9 months of observation, the volcano erupted more than 70 times. And each time, just before the event, microphones recorded strange sounds that resembled grunts, as well as vibrations.

Similar low-frequency sounds and vibration, scientists were able to obtain by computer simulation of the process of thermal expansion and the subsequent rupture of large gas bubbles ranging in size from 50 to 220 meters, floating from a depth of 100 meters to the surface of the water.

The bubbles released by the Theologian are likely to reach 440 meters in diameter and form when the lava comes in contact with seawater. The bubble contains large amounts of water vapor, carbon dioxide and sulfur dioxide. It is very likely that it also contains a fair amount of solid and opaque microparticles, which are responsible for the subsequent darkening of the air.