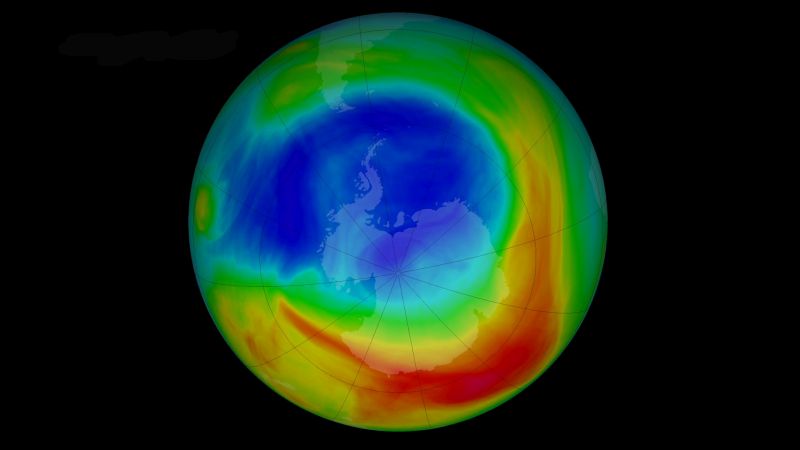 Ozone is a highly reactive molecule consisting of three oxygen atoms that naturally occurs in the upper atmosphere. About 10-40 kilometers above the Earth’s surface, the ozone layer is located in the stratosphere. It protects the planet from potentially harmful ultraviolet radiation, which can cause skin cancer and cataracts, suppress the immune system, and damage plants.

The ozone hole above the Antarctic begins to grow at the end of winter in the Southern Hemisphere, when increasing solar activity begins to promote reactions that destroy the ozone layer. As a result of these reactions, chemically active forms of chlorine and bromine are formed from technogenic compounds.

The chemistry leading to their formation includes reactions that occur on the surface of particles formed in the cold layers of the stratosphere. This ultimately leads to uncontrolled reactions that destroy ozone molecules. At warmer temperatures, fewer polar stratospheric clouds form, and they do not persist for so long, limiting the process of destruction of the ozone layer.

Satellites NASA and NOAA (National Oceanic and Atmospheric Administration) have long been observing the ozone layer of our planet. This year, for the third time in 40 years, satellites made it possible to observe an unusual phenomenon: the effect of warm temperatures at the beginning of winter generated the strengthening of the ozone layer, and not its destruction.

This year, the hole shrank to a record size of just 10 million square kilometers. According to forecasts, it can completely come to naught within a few weeks.

The fact that the ozone layer is capable of reversibly recovering to its original size cannot but rejoice. According to scientists, ozone holes are seasonal phenomena, and they usually disappear at low temperatures and in the absence of sunlight, since in this case polar stratospheric clouds decay.