The development of missile technology, it seems, is nearing its limits, so scientists and engineers engaged in the development and study of new methods for the output of goods into orbit and beyond. Among the most promising — proposed in 1895 by Russian scientist Konstantin Tsiolkovsky, the idea of a “space Elevator”.

Until recently it was believed that modern technology does not allow to realize it, but a group of American scientists disagrees with this opinion.

Tsiolkovsky proposed the project “orbital tower” developed in the 1960s, Soviet engineer Yuri Artsutanov. In his writings he suggested modified in relation to the accumulated from the time of Tsiolkovsky experience design. It is noteworthy that his article “In the space on the locomotive” Artsutanov published almost a year before the flight of Yuri Gagarin. In it, he proposes to use for the delivery to orbit of cargo and people the ropes tied to the in geosynchronous orbit satellites.

Thus, free-flying cables (rotovator) rotate with the speed of the Earth or other heavenly bodies, which ensures their tension. Transportation in the cables thus produced with a much smaller acceleration than the rocket launch. To build a “space Elevator” is dedicated to the famous novel by British science fiction writer Arthur C. Clarke “Fountains of Paradise”.

Theoretically much more secure, cheap and reliable way of mastering near-earth space to implement requires, above all, production of ropes strength more than 65 GPA (for comparison: the strength of steel — 1-5 GPA, quartz fibers of about 20 HPa). The required strength has not yet reached even heavy-duty carbon nanotubes graphene-based (despite the fact that the length of the existing samples do not usually exceed a few centimeters).

However, the article submitted for publication in the journal Space Policy American researchers Bankson and Radley (the original is available on the website arXiv.org), proves that the construction of the space Elevator on the moon, most likely, perhaps with the use of available today commercially available polymers.

The first phase of the project, named the authors of the Deep Space Tether Pathfinder (DSTP), must simultaneously become a prototype suitable for commercial operation of the space Elevator between Earth and the Moon, and important tool for the study of our satellite.

The rotation of the DSTP will allow you to seize sufficient for the scientific studies the number of samples in Shackleton crater, after which approximately half of the turnover of the cable, the capsule containing the samples will go to the Earth, by obtaining the acceleration, allowing to choose the optimal trajectory for the return.

The device, roughly speaking, works like a catapult, allowing you to move cargo from the moon to the Earth. DSTP will be able to make only one shipment of samples, and then go into space — and he becomes the object of study of the impact of micrometeorites on the status of the cable and other factors that are important for understanding the operation of the space Elevator. The length of the cable DSTP will be 5000 km, and the mass is 2228 kg.

If successful the next stage would be the construction of suitable for the movement on the orbit of the moon from the moon’s surface and then to the Ground infrastructure is actually a Lunar space Elevator (LKL).

The system should be a attached to the surface of the moon extra long rope passing through the Lagrange point (which is fixed on the rope the load will remain stationary relative to the two celestial bodies) between the Moon and Earth is approximately 56 thousand km from the moon. LKL will be able to raise the moon approximately five tons of rock per year and lowered to the lunar surface equipment of the same total weight.

As the authors of the article, for the project, given the lower gravity on the moon, it is possible to use already existing and available commercial synthetic polymers, such as ultrahigh molecular weight high density polyethylene (UHMWPE used in particular for the production of body armor, facing the shipbuilding slipways, world-wide.

In Russia there are two pilot plants for the production of such material) and manufactured in Japan, the Polyphenylene-2, 6-mesobionano (PBO trade name Zylon is used in particular for the reinforcement of concrete building blocks).

According to calculations of scientists, for the implementation of the project will be sufficient flight space mission of the NASA Discovery class. After delivery at the Lagrange point 58.5 tons polymer Zylon there will be equipped “warehouse” is necessary for the functioning of the Elevator materials. From there on the lunar surface, in the Central Bay, the tether lowered the lander, which will become the base station for lifting and lowering loads.

In the open space will be released, the counterweight necessary to keep the system in equilibrium, the total length of the cable, thus, will reach 278,5 thousand km away. Samples of regolith, the lunar soil, up to 100 kg will be sent to the intermediate base in a Lagrange point with refillable capsules, powered by solar energy. 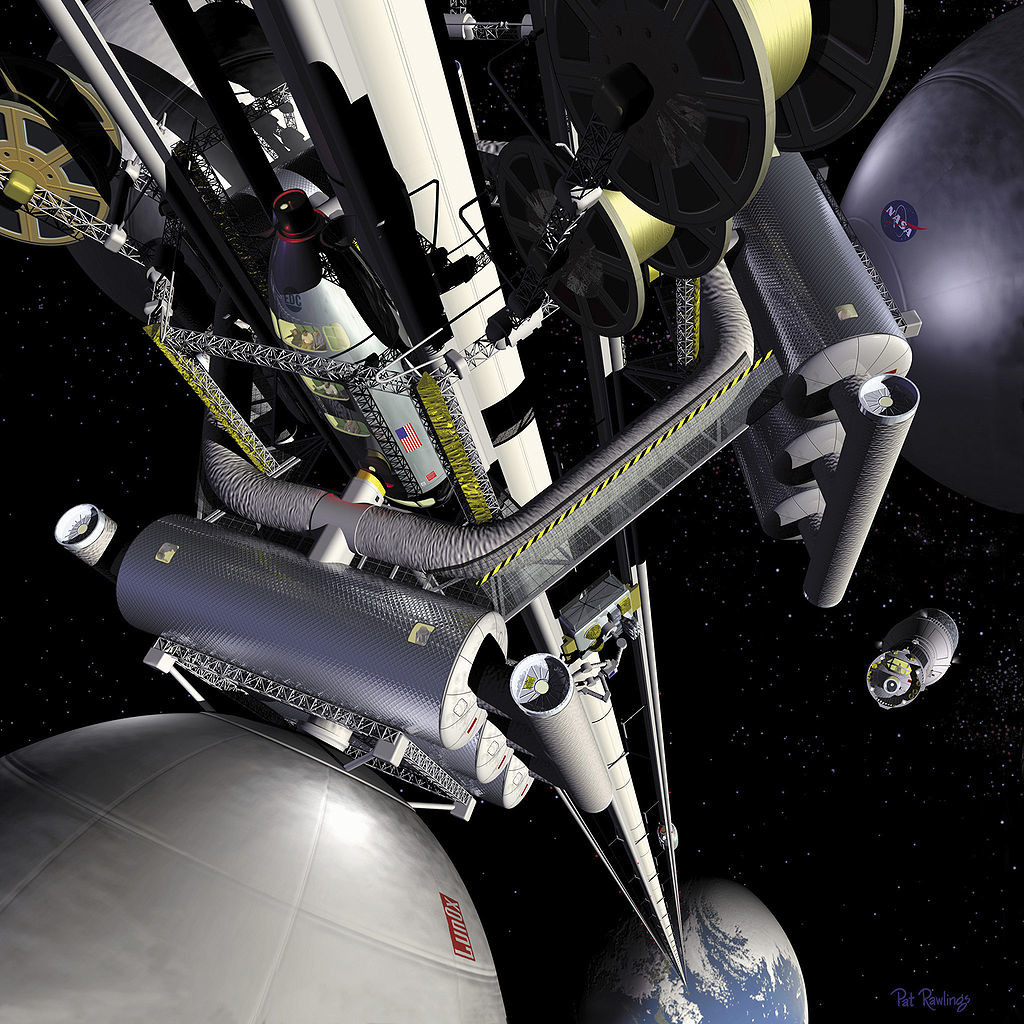 Fuel for the further transfer of the samples to Earth is not required as atapisys from a cable at a distance of approximately 220,67 thousand km from the moon, the capsule will continue to move by inertia and enters the Earth’s atmosphere in about 34 hours at about 10.9 km/s. to estimate the possible volume of freight turnover, it is enough to recall that during all lunar missions “Apollo”, the Land was delivered to only 382 kg of regolith.

If successful, the second LKL can be built on the side of the moon, with the base station in the center of the crater Lipsky. As pointed out by the researchers, such a provision would, among other things, an ideal place for radio astronomy research, as the reverse side of the moon completely isolated from the radio waves from the Ground.

The period of possible exploitation of elevators the authors of the project is estimated at five years. In addition to the research and hypothetical use for mining, lunar elevators can play an important role in the implementation of the program of a manned flight to Mars.

As published in the fall of 2015 report of the international research group from mit, Keio University and the jet propulsion Laboratory, California Institute of technology, the starting mass of the spacecraft to Mars can be reduced by 68 percent through the use of engines contained in the regolith oxygen (41-46 per cent specific weight). Eubanks and Radley in their work indicate that an additional factor may be the use of a counterweight LKL on the side of the moon to catalyse and launch a Mars cargo vehicles to supply future colonies on the red planet.