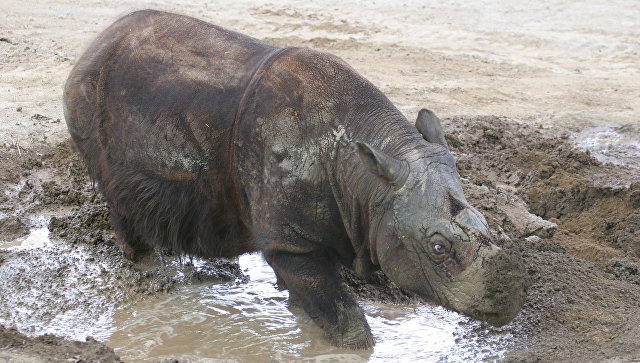 On the island of Sumatra, there is a unique population of rhinoceroses, whose numbers began to decline about a million years ago and have never been restored in all this time, say scientists.

“Our analysis of the genome shows that the entire Pleistocene was an extremely difficult time for the populations of rhinos in Sumatra.When the sea level rose and the modern Sunda Islands were isolated from the Asian continent, the number of these rhinoceroses sharply decreased and was never restored,” says Herman Mays (Herman Mays) from the University of Marshall in Huntington (USA).

The island of Sumatra and some corners of the Malay Peninsula and the Borneo Island are inhabited by a very unusual kind of rhinoceroses – Dicerorhinus sumatrensis, whose distinguishing feature is that their skin is covered with thick wool, like the famous woolly rhinoceroses of the glacial period. In the past, Sumatran rhinoceroses inhabited the entire territory of Southeast Asia, but today their numbers have shrunk to a critically low rate, about two hundred individuals.

The main reason for the decline in their numbers in recent years, according to environmentalists, is poaching – the horn of the rhino is one of the most expensive components of traditional Chinese potions, which is why even the most stringent prohibitions do not stop hunters from killing the world’s rarest animals. An additional problem is that these rhinos hardly breed in captivity, which forces scientists to think about even their cloning.

Mace and his colleagues found out that these animals began to die not recently, but almost a million years ago, first decoding and studying the genome of the Sumatran rhino. The donor of the genetic material was a male named Ipukh, who died in the zoo of Cincinnati approximately four years ago.

Comparing halves of its DNA with each other, as well as with similar sites in the genomes of other rhinos, biologists found out when Dicerorhinus sumatrensis separated from the common tree of the evolution of these hoofed animals, how the size of their population changed over time and how many harmful mutations their genes contain.

These observations showed that Sumatran rhinoceroses are an extremely degenerate species of animals. The level of their genetic diversity is record low for wild animals – in terms of the number of identical sites in both halves of their DNA, they can compete with thoroughbred horses and other domestic animals, which breeders constantly interbreed with each other.

The reason for this is simple – about a million years ago the number of these rhinos was relatively large, about 60 thousand individuals. Approximately 700-800 thousand years ago there was a certain cataclysm, as a result of which their number decreased approximately 5-6 times, as a result of which Dicerorhinus sumatrensis set foot on the road to extinction, over which they have been going for a million years.

This is manifested in the fact that their numbers slowly but constantly declined throughout this time, dropping to a mark of about 10 thousand individuals by the time of the last onset of glaciers, which happened 35-25 thousand years ago, and once again falling to the mark in 700 individuals after the ice has last retreated and the sea level has grown about 15 thousand years ago.

A similar story of the life of Dicerorhinus sumatrensis, as scientists say, indicates that these animals are extremely vulnerable to the effects of climate change, and that ecologists will have to take really very serious measures to keep their populations from total collapse.