The sun became the catalyst for the origin of life 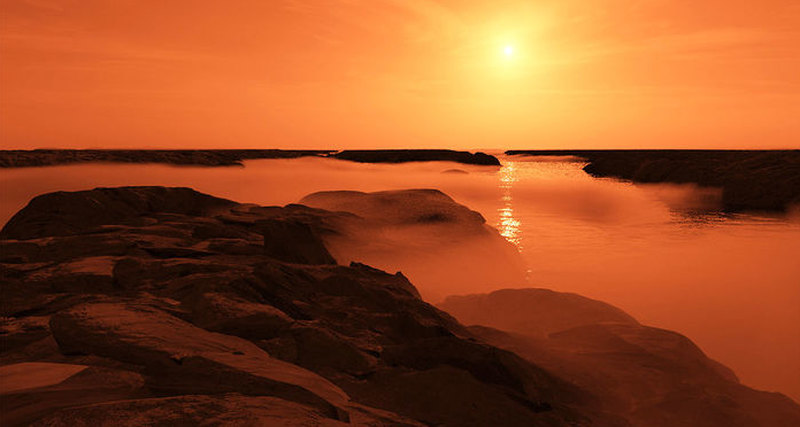 Scientists were able to recreate the conditions in the laboratory that reigned on Earth 4 billion years ago, and found that sunlight could become a catalyst for the formation of the first enzymes necessary for the existence of life.

Life on Earth is a paradox. To function, organisms need energy. But in order to use it, living beings need complex mechanisms of fermentation, developed over millions of years of evolution, from diffuse respiration to photosynthesis. But what was before, an organism or an enzyme? A new study demonstrates that the clusters of iron and sulfur underlying most vital enzymes could float in the primary seas of the young Earth. Their occurrence is due to a combination of primitive biomolecules, iron salts and a previously unknown ingredient – sunlight.

So far, most of the research on the origin of life has focused on the mechanisms of the emergence of organic building components, which later formed proteins and RNA. Less studied is the genesis of clusters of iron and sulfur – the active “core” of enzymes, which are an indispensable attribute of almost all processes of cellular chemistry. “I have never seen an organism that does not depend on them,” says Sheref Mansi, a biochemist from the University of Trento in Italy, who led the new work.

To find out whether the combinations of iron and sulfur were the main “ingredient” of life since its inception, or the first microorganisms did without them, Muncie and his team recreated in their laboratory conditions that imitate the early Earth. Claudia Bonfio, a biochemist from the University of Trento, removed oxygen from the medium and mixed together the solution with iron ions and glutathione – sulfur-containing peptides, which were probably present in the prebiotic “chemical soup” – the liquid medium from which life originated. While iron remained in divalent form, nothing happened. But when you turned on the UV lamps – and the real magic began.

According to scientists, a few minutes later, formation of iron-sulfur-containing clusters is observed. Under the influence of UV radiation, the solution changed from violet to red, indicating a reaction between iron and sulfur. If the medium is subjected to prolonged irradiation, the reaction proceeds further, causing the solution to become brown. As a result, light simultaneously releases sulfur atoms from peptides and oxidizes iron, converting it to a trivalent form, which readily interacts with sulfur to form salts. The study is published in Nature Chemistry.

After that, the group tested more than 30 potential compounds under different conditions and found that the reactions also proceeded with simpler sulfur-containing molecules. The authors note that in most cases the reactions are “strikingly similar” to how iron-sulfur clusters are synthesized in modern living cells. According to Muncie, the fact that in the early processes of organic synthesis, sunlight plays such an important role, it is logical – it is an infinite source of quite a large amount of energy. In addition, on Earth at that time there was no such dense ozone layer, and therefore the radiation was an order of magnitude more intense. It is worth noting that, and in the trace elements, there was no shortage: most water bodies were directly connected with volcanic faults and springs, which washed out the iron from the depths of the earth. Therefore, according to Jack Shostak, a molecular biologist at Harvard University who also took part in the work, the water-filled crater is a sort of incubator in which all conditions contribute to the birth of life.

Be that as it may, Muncie is very cautious about the results of her work, let it and was crowned with success. His fears can be understood: laboratory conditions, whatever they are, still can not fully simulate the conditions on Earth 4 billion years ago. “These results will become important if we can prove that there is some kind of selectivity in the system of chemical substances, which led to the transformation of the inanimate nature into living systems. But, scientists fear, finding the exact sequence of events that gave rise to the spark of life can forever be lost beyond the horizon of time.