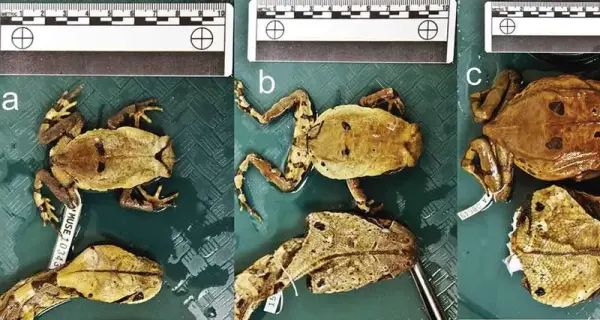 Bates’ mimicry is an amazing similarity in color between amphibians and reptiles, which has only recently received a scientific explanation.

The harmless giant Congolese toad Sclerophrys channingi, widespread in the Democratic Republic of the Congo, has evolved to disguise itself as the poisonous Gaboon viper Bitis gabonica.

For 10 years, biologists at the University of Texas (USA) have observed the toad in its natural habitat, and also studied the behavior of an amphibian. It turned out that the shape of the toad is similar to the head of a viper, the color of the skin and the location of the patterns – spots and stripes – on the body match.

At the same time, in addition to external similarity, the toad learned to imitate the sounds that a snake makes before attacking. The viper, in case of danger, tilts its head and hisses – a similar behavior has been mastered by the giant Congolese toad.

Biologist Eli Greenbaum, one of the authors of the study, stressed that Bates’ mimicry is not uncommon, but for the first time scientists have managed to find an amphibian that can imitate a poisonous snake for self-defense.