The traffic service ruined half a century of research

In the US, the traffic service accidentally fixed shift, which seismologists have observed almost half a century.

As told to the researchers, the shift represented the visual proof of Haagsche of a fault that occurred due to the relative motion of the Pacific and North American tectonic plates. It is this rift, among other cataclysms provoked the rift the San Andreas fault.

As for the shift, under the supervision of seismologists for more than 45 years, he was at the junction of the curbs on the corner of rose and Prospect. The first pictures of the shift in the Arsenal of scientists appeared in 1971. In the period within five years the border along with a part of the road has shifted two centimeters, and curb plate has ceased to relate to each other.

The operation of the border was evident to the geologist and scientific journalist from Auckland, Andrew Alden. The authorities of the Californian city of Hayward in response to the outrage of scientists said that the researchers should have warned about the importance of this area. The administration is nothing more than a faulty stretch of road. Now the shift has a ramp for the passage of wheelchairs. 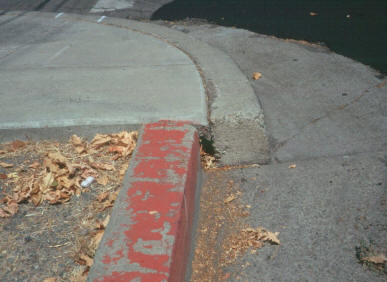