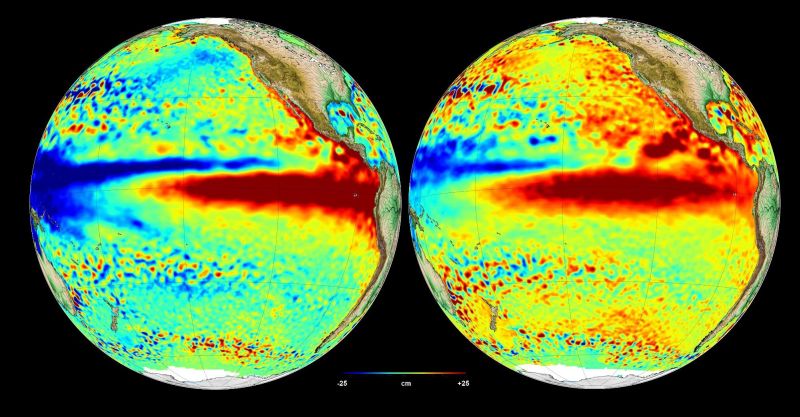 By the end of 2018, the intensity of temperature fluctuations in the surface waters of the Pacific Ocean may increase, which will significantly affect the climate of different parts of the globe.

The World Meteorological Organization (WMO), established by the United Nations, has published a new forecast for the development of El Niño in 2018. According to the organization’s press release, the probability of this effect increasing by the end of the year is 70%.

El Niño is also called the Southern Oscillation – in fact, it is the deviation of the surface water layer temperature in the equatorial part of the Pacific Ocean from the average normal value, which significantly affects the climate of different regions of the Earth. Also worth paying attention to the narrower use of the term: El Niño is called the deviation of water temperature in the larger side, and La Niña – in the smaller. At El Niño, an array of heated near-surface waters begins to move toward the east, which causes a decrease in the intensity of the trade winds and a slowdown in the rise of deep ocean waters to the surface off the coast of Peru. It should be understood that a short-term increase or decrease in water temperature per se is not El Niño or La Niño. In order for the phenomenon to be classified in this way, the tendency to change the temperature should last for five months.

El Niño attributes to the increase in atmospheric pressure over the Indian Ocean, Indonesia and Australia and, conversely, the reduction of air pressure over the island of Tahiti, the central and eastern parts of the Pacific Ocean, the weakening of the trade winds, rains in the Peruvian deserts. Especially the influence of El Niño on the climate is felt in South America. In North America, winters can become warmer.

The last most intensive El Niño occurred in 2015. Based on forecasting models and expert assessments, WMO concluded that a similar phase of South Oscillation is possible in the near future, but its probability is not so great – only 70%. 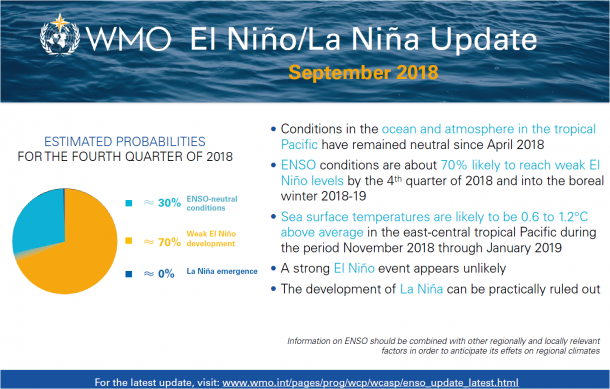 “WMO does not expect that the proposed El Niño will be as powerful as it is in 2015-2016, but it will still have significant consequences,” explains the head of the World Meteorological Organization Petteri Taalas. “The preliminary forecast of this event will help save a lot of human lives and prevent economic losses.”

According to Taalas, global climate change affects the traditional dynamics of the South Oscillation phases, just as it affects global climate change. 2018 began with a weak La Niña, but this event remained virtually unnoticed amid general warming of the climate. In such circumstances, El Niño becomes more likely.