The underwater world of Antarctica filled with life 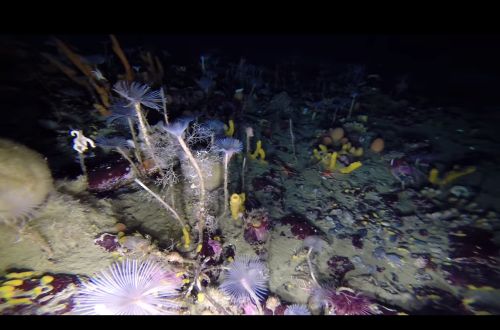 The remotely-controlled submarine photographed a tremendous personnel of the Antarctic seabed, having shown surprisingly dynamic and color world filled with living beings.

On the surface of Antarctica it is cold and desert, but its seabed teems with life, sponges, sea spiders, sea hedgehogs, cucumbers and stars live there. This color, bright almost alien landscape was photographed by the remotely-controlled submarine sent by the Australian scientists.

“These living beings live in water with the temperature about-1,5 degrees all the year round, they are hidden by ice one and a half meter thick of 10 months in a year” — the biologist from the Australian Antarctic division Glen Dzhonstoun says. — “The iceberg can sometimes erase some part of a bottom together with all its inhabitants, but in most cases the sea protects all, creating rather stable environment in which biological diversity prospers”.

Researchers study acidity, oxygen content, salinity and temperature in these waters, and this shooting — only a bonus to work. Unfortunately, Antarctica can become one of the first places which will be damaged from effect of oxidation of the ocean in operation.

“Carbon dioxide is quicker dissolved in cold water. Polar waters are oxidized twice quicker than tropical or moderate regions therefore we expect that these territories the first will be affected from oxidation of the ocean” — the leader of the project Johnny Starck says.