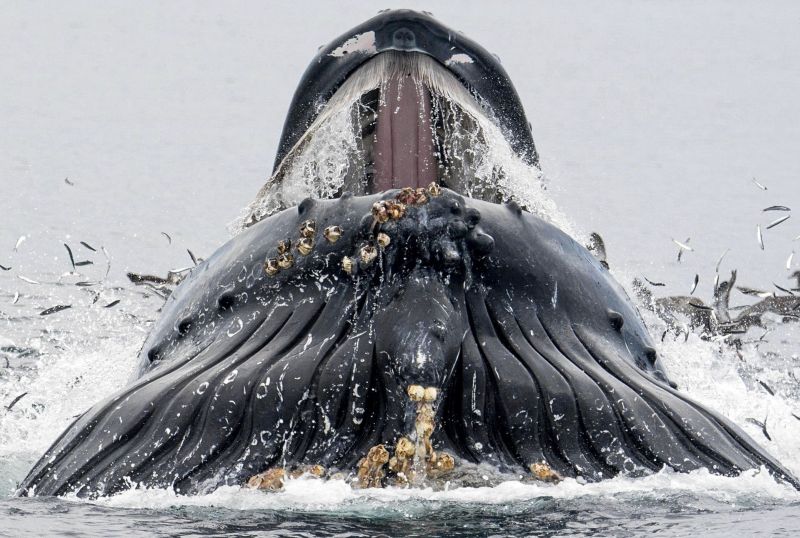 Atlantic humpback whales have mastered the new tactics of hunting, learning how to deceive the fish and make it swim in their mouths.

Humpback whales are one of the largest animals on the planet, and they need adequate food. Every day, each whale absorbs up to 2.5 tons of fish, and to catch it enough, it uses deft hunting tricks. The best known is their tactics of swimming fish flocks along a spiral compressing from the bottom up. At the same time, the whale actively releases air, surrounding the prey with a whole wall of bubbles and forcing it to huddle in a heap, convenient for capturing in one gulp.

However, Canadian biologists, whose article was published in the journal Marine Mammal Science, describe another hunting tactic of humpback whales, which they were able to fix in the ocean northeast of the coast of Vancouver. At the same time, the whale is guided by birds – local kairas and konyugs, – cautiously sailing directly to the fish pack, which they attack from above. Rising to the surface, the whale opens its mouth and simulates a small body of water – its frightened fish are perceived as a suitable refuge, at the edge of which you can wait out the attack of birds. They swim in the mouth themselves, and, as soon as there is enough prey, the whale closes it, sometimes even pushing the fish that are “gaping” nearby with the pectoral fins.


It is noted that for the first time, scientists were able to observe such tactics in action only in 2011. However, since then its use has been recorded in more than 20 individuals: apparently, they learn from each other this convenient and useful technique. And this is not the only example of the existence of whales own forms of culture – transmitted through generations of dynamic forms of behavior, skills and knowledge.