The United States on the verge of a nuclear catastrophe 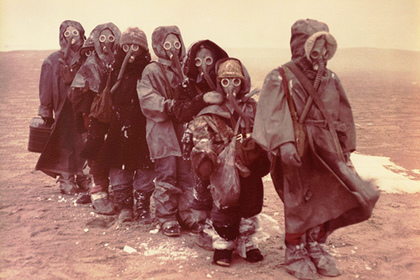 A group of scientists from Princeton University accused of negligence of the US Nuclear Regulatory Commission (NRC). They found that during the adoption of a program of measures to protect against radioactive threat, the commission relied on erroneous data.

In most US nuclear power plants, nuclear fuel is located in close proximity to nuclear waste. After the fuel is removed from the core of the reactor, radioactive fission products continue to disintegrate, releasing heat. All nuclear power plants store spent fuel at the bottom of deep pools for at least four years, during which time it cools slowly. According to the authors of the article published in the journal Science, this is the main problem.

In the basins, fuel rods are stored in huge quantities and packed tight, which is why these wastes are extremely unstable. Inactivity of NRC leads to a high risk of the so-called radioactive fire in places where the spent nuclear fuel is cooled off the reactor compartments.

Physicist Frank von Hippel estimated that in case of a fire at one of the oldest nuclear power plants in the town of Pich Bottom, Pennsylvania, under the cloud of radiation there will be a territory twice the area of ​​New Jersey (about 50 thousand square kilometers). This will lead to the evacuation of eight million people, and financial losses amount to two trillion dollars.

When assessing the potential threat in an independent commission, they could deliberately make mistakes, scientists say. Von Hippel argues that representatives of the nuclear industry directly, and also through Congress, exerted pressure on the NRC to underestimate the potential consequences of the disaster. “Otherwise, it promises to increase costs and lead to the closure of a large number of nuclear power plants – added von Hippel. “Unfortunately, if the society keeps silent about this dangerous situation, NRC will continue to be influenced by the industry.”

According to the NRC, a fire in a pool with spent fuel in a nuclear reactor will result in damage of $ 125 billion. In the same commission report, it is said that the prompt dispatch of rods to dry containers can reduce radioactive emissions from fires by 99 percent. However, the NRC felt that the likelihood of such a fire is unlikely, so security measures would be unjustified – accordingly, businesses do not need to spend millions of dollars to provide these measures.

Researchers, on the contrary, are confident that the risk of a catastrophe is too great to be silenced and neglected by security measures. Provoke it can do anything – from a major earthquake to the terrorist attack. NCR excluded the possibility of the terrorist attack, as well as the fact that because of the disaster, the terrain will suffer in a radius of more than 80 kilometers from the nuclear power plant. Failure to assess such consequences can lead to an accident, Von Hippel is sure.

It is also noteworthy that the commission underestimated the potential damage from the catastrophe 20 times compared with the estimates of scientists. Compensation for losses will be borne by the taxpayers. The blame for everything is the law on compensation of losses in the field of the Price-Anderson nuclear industry, adopted in 1957, which regulates issues related to non-military nuclear facilities. According to this law, in the event of an incident, the nuclear power plant pays no more than $ 12.6 billion for the liquidation of the consequences, while the rest is repaid from the budget.

“Too often, the NRC uses erroneous data to justify its inaction, resulting in millions of Americans being exposed to the risk of radioactive ejection that will render their homes uninhabitable and deprive them of their livelihood,” says co-author Edwin Lyman. “It’s time for the NRC to use the data of scientists to make decisions.”

Specialists at Princeton University are not the first to publish such articles, in which they urge the NRC to take measures to minimize the risks of the disaster. In previous works, the authors also point to many errors made in the preparation of reports. Exactly one year ago – on May 26, 2016 – a similar study was published, but the figures in it were somewhat different. Then the scientists calculated that a major fire at a nuclear power plant in Peach Bottom could lead to the need to resettle 3.46 million people from the territory of a total area of ​​31 thousand square kilometers. These data were obtained using a program that simulates the spread of radioactive smoke by wind.

In both works, researchers rely on information known about the accident at the Fukushima-1 nuclear power plant. An earthquake of magnitude 9.0 caused a tsunami, which flooded the backup generators, as a result of which the station was left without electricity and reactor cooling systems. As a result, the nuclear fuel of the first, second and third reactors began to melt, a fire started, several explosions occurred.

Japan’s nuclear and industrial safety agency estimated that during the accident, 137 Cesium equivalent, equivalent to 168 “Malysh” bombs (the so-called nuclear bomb dropped on Hiroshima in 1945) was thrown into the atmosphere. Accident was awarded the seventh, the highest level on the scale of nuclear events. Of the area within a radius of 50 kilometers from the nuclear power plant, 88,000 people were evacuated, and they left the same number independently. Unsuitable for life were 1.1 thousand square kilometers of land. According to some sources, about $ 200 billion was spent on liquidation of the consequences.

It was after the accident in Japan that the NRC considered proposals to develop new safety requirements for nuclear power plants in the United States. Among other things, it was then proposed to forbid the owners of enterprises to tightly pack the spent fuel into pools and oblige them to move the rods to dry containers.

“The Fukushima accident could be 100 times worse if the leakage of water covering the spent fuel in the basins near each of the reactors began,” comments Von Hippel. “Then it almost happened in the fourth block.”

Scientists also used data on the Chernobyl disaster. They worked on a possible scenario, which is based on the actual weather conditions of 2015. It is indicated that as a result of the accident at the Peach-Bottom nuclear power station, the cities of New York, Philadelphia, Baltimore, Washington, and the District of Columbia will be struck.

Von Hippel recalled that even if the commission does not take any measures, the Congress can take up the matter. The solution of the problem, according to the scientist, is to ensure that states subsidizing nuclear reactors provide funds only to those NPPs that commit to store spent fuel in tightly packed concrete containers (dry method). Otherwise, a severe flood, a tsunami or an earthquake can cause a global catastrophe.