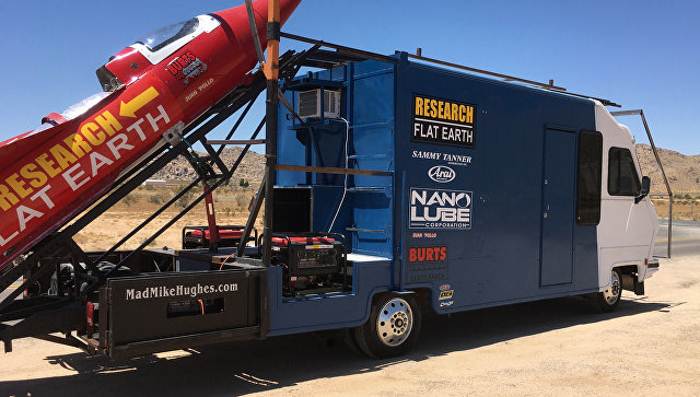 Michael Hughes, a famous stuntman and supporter of the “flat Earth” theory, explained his refusal to attempt to fly into space on board a missile he built on this weekend in that the US authorities did not allow this action.

“We were wondering if we needed such permits, and the bureau representatives told us before that no additional papers would be needed.” Messages on my plans appeared in all the leading media outlets of the world last week. “Perhaps one of the high-ranking officials of the ministry saw this news , and he, apparently, has demanded “to check up” my activity “, – has declared Hughes.

He attributes himself to a small group of marginalized people who claim that the Earth is actually flat, as the Bible and the myths of the ancient Greeks tell about it, and that all the images from telescopes and photographs of the Earth from orbit are the fruit of a conspiracy of scientists and a sophisticated fake.

This conspiracy theory Hughes planned to prove on the last weekend, going on a flight on his own built rocket. She, as the stuntman had hoped, had to climb to an altitude of about 550 meters and fly about a kilometer, reaching a speed of 1000 kilometers per hour.

This rocket is not a direct analogue of the Russian “Protons”, American “Saturns”, Falcon 9 Ilona Mask or Blue Shepherd Jeff Bezos – from its nozzle not the products of combustion of fuel are pulled out, but compressed steam pumped into the tank of the “space ship” under great pressure.

The launch of this device, as promised by Hughes, was to be held on Saturday in the abandoned town of Emba in the Mojave Desert, but this did not happen. At the end of last week, according to the conspiracy officer, he was contacted by representatives of the Bureau of Land Management of the US Department of the Interior, who notified Hughes that he can not conduct such launches without their permission.

As the stuntman noted, the site where the launch was to be launched is of sufficient size to ensure the safety of spectators and any other people, and therefore this decision of the ministry upset him. Hughes hopes to solve all these problems before the end of this week.