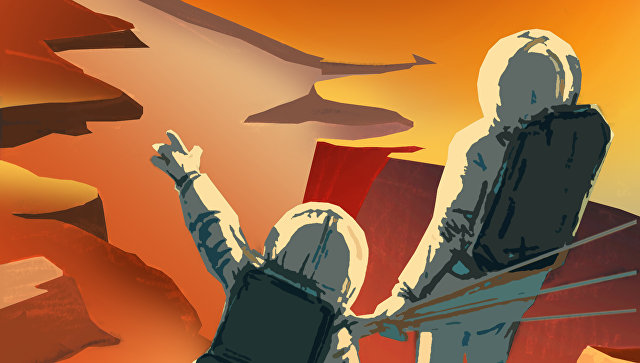 American engineers have announced the creation of a nuclear reactor with a capacity of 333 kW and the size of a piano, adapted for operation in Mars conditions and is able to provide a base medium in size, power and heat for over 15 years.

Such printers, as shown by experiments on Board the ISS and on Earth, allow you to print almost all the necessities of life of the colonists on Mars, with the exception of one of the most important things on the base – power source, whose power would be sufficient to ensure the operation of the 3D printer, as well as power and heat the whole base.

Akansha Kumar (Kumar Akansha) with colleagues from the Idaho National laboratory (INL) in Idaho falls (USA) for more than five years working to create a compact nuclear reactor that could be sent into orbit and to land on the moon or Mars. For example, in 2011, scientists from this laboratory have described the establishment of a nuclear suitcase, a compact reactor with a capacity of 40 kW, and whose length is only 30 inches, and a width of about 15 centimeters.

In his new job, Kumar and his colleagues increased the reactor power on the order of magnitude, significantly changing its design and adapting for work on the surface of Mars. As nuclear fuel is used a special alloy of low-enriched uranium and ceramics containing 15% of uranium-235, Packed in a special way in a special shell made of zirconium carbide and tungsten.

As coolant is used unusual for Earth material – swierklany carbon dioxide, which can be directly extracted from the Martian atmosphere, consisting of 99% of this stuff. As the temperature of the air on Mars is very low in comparison with the Earth, this procedure does not require a lot of energy.

The new reactor, according to scientists, it will produce about 1.6 megawatts of thermal energy, about 20% of which will be converted into electricity and the rest to stand out in the surrounding space.

To the reactor continuously worked for over 15 years, engineers INL inserted between the layers of nuclear fuel special mattresses made of dioxide of uranium-238. It is irradiated by neutrons arising from decay of uranium-235, and is converted into plutonium-239. This plutonium interacts with the neutrons and decays gradually, maintaining reactor power at a nominal level as the burnup of uranium-235.

Like previous nuclear suitcase INL, the new reactor will have a very modest dimensions: the size of the active zone are only 80 to 134 cm that will fit the entire device in size with a piano or even smaller dimensions.

The safety of this nuclear piano is the fact that it is a key part – hydride of zirconium, neutron moderator, allowing the atoms of uranium-235 to interact with it – does not withstand heating to high temperatures. Accordingly, if the reactor fails, the zirconium hydride is heated to a critical point, will disintegrate into zirconium and hydrogen, after which the decay of uranium in a natural way stops.

The authors believe that their nuclear reactor may be one of the cheapest and most versatile food sources capable of supplying power Mars bases and space ships for decades without refueling, and for even more time when it is updated.