The veil of dense fog turns into “falls” 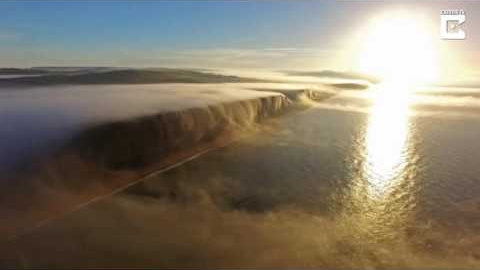 The drone photographed the improbable moment — the veil of dense fog turns into “falls”, being broken from the edge of the sea rock.

The photographer James Lavridzh launched the drone with a camcorder on height of 61 meter over rocks in Vest-Bae in the English county of Dorset. The UAV photographed a moving white carpet which went to the sea on video.

But when the loop of fog reached the edge of the 30-meter plumb rock, it “fell” and floated down to the beach as falls.

The 26-year-old photographer stood on the coast, completely environed with fog, and within 30 minutes removed a natural phenomenon until its camera was discharged.

When Lavridzh arrived home, it connected four videos in one and accelerated a roller by 10 times, having created video impressing a time-laps.

Лавридж has imprinted the natural phenomenon during the period from 8 to 8:30 in the morning when the rock top in Vest-Bae has been covered with a fog cloud.

Usually warm air cools down when rises upward. But sometimes there is the return phenomenon which is called temperature inversion. In such cases warm air acts as a gag, holding under itself cold air and fog. As a result there is a river from fog which, seems floats in the sea. Such show can be observed often in Iceland where the roar of wind sounds almost like real falls.