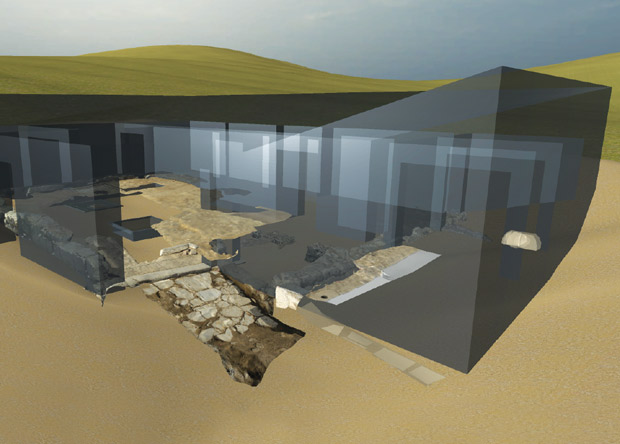 An international team of archaeologists with the support of the University of Michigan published a beta version of a large-scale online project “House of the times of the Classical Republic in Gabia.” The site of the project published a full report on the excavation and 3D-reclamation of the ancient Roman villa of the IV-III centuries BC.

Gabia is one of the oldest cities in the Latin Union, in the 8th century BC, it competed with Rome for political domination, but by the 3rd century BC it practically ceased to exist.

In the online edition, the authors provided readers with the opportunity to explore the excavation model and 3D reconstruction of an ancient Roman villa from the times of the classical (middle) republic. In the course of studying the space of the villa, the user can click on any item in the reconstruction and find out about his appointment.

In addition to reconstruction, the researchers cataloged and published on the site all the artifacts found during excavations. All items are context-bound and have a set of tags, which are convenient to search for finds of the same type or from a single period layer.

Icons on the site of the project, indicating types of findings that can be viewed online: animal remains, ceramics, coins and other small finds, human remains, plant remains.

Excavations in Gabia were started under the direction of Nicola Terrenato (Nicola Terrenato) in 2007. Initially, archaeologists pursued the goal of describing the process of growth and desolation of an ordinary Roman city in the third century BC. Researchers have chosen Gabia because it has grown dramatically since the beginning of urbanization and has also plummeted due to a close neighborhood with the exalted Rome.

From the point of view of carrying out archaeological works, Gabia is much more convenient than Rome. In Rome, many buildings of the era of the Classical Republic were rebuilt or built on top of the already modern city. In Gabia, such active construction has never been carried out, and only some buildings were dismantled for construction materials.

The main building, which has been reconstructed so far within the framework of the project, is a rich aristocratic villa the size of half a football field, built at the turn of the IV-III centuries BC, 60 per cent preserved to this day. The villa is unusual in itself, it is built of giant blocks, laid on top of each other in a manner similar to that used in the construction of the Lego, about 125 years before the use of a binder solution in ancient Rome. So rich ancient Roman buildings built on this technology, archaeologists have not yet found. Further study of the find, as Nicola Terrenato believes, will provide an opportunity to take a fresh look at the history of ancient Roman architecture.

The project is created for educational and scientific purposes, researchers believe that any reader will be able to study the published material and use it in his scientific work.

“House of the times of the Classical Republic in Gabia” is not the first project for the digital reconstruction of the life of ancient Romans. A year ago, an online publication of the 3D reconstruction of the Appian road sections was launched, and this autumn a model of the Lucia Cecilia Yukunda reconstructed using 3D modeling of the interior of the house of the wealthy pawnbroker, who lived in Pompeii shortly before their destruction, was posted to the network.