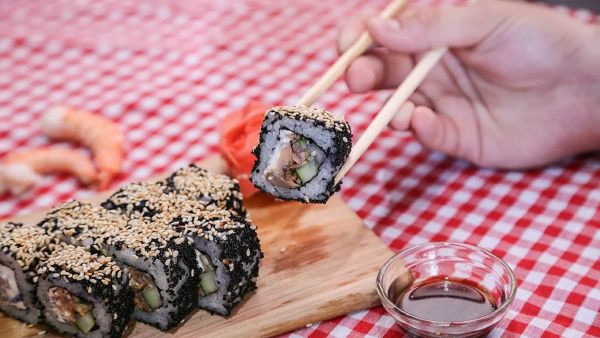 The woman had hallucinations, insomnia and incontinence for several months after she ate expired sushi. Writes about this Mirror.

The doctors who treated the patient for a long time could not understand what caused her ailment until they discovered a huge tapeworm in her intestines, the article says.

One day, a woman returned from work and was so hungry that she ate sushi that had been in the refrigerator for five days. To mask the sour taste of expired fish, she dipped it in soy sauce.

After some time, she began to hallucinate, she began to suffer from malnutrition, incontinence, insomnia, feelings of anxiety. It seemed to her that insects were crawling along the walls and under her skin. In addition, the patient felt as if “her heart was beating from her neck.” At the same time, she started having stomach cramps and had a feeling that her stomach was “shaking” before going to the toilet.

A few weeks after the woman ate the expired food, she informed her husband that there was a “fish dangling” in her belly.

The patient was treated for several months, she was hospitalized twice after terrible seizures. Later, doctors realized that the cause of her illness could be a tapeworm. This was confirmed by analyzes of her stool, which found thousands of tapeworm eggs, as well as fragments of the parasite itself.

The woman was given just one tablet of anti-tapeworm medicine and she recovered completely.