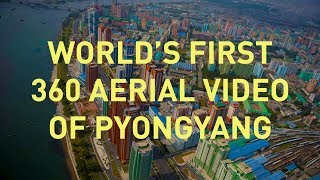 Singapore photographer Aram Pan first recorded on the video one of the most closed places in the world – the North Korean capital of Pyongyang, flying over the city on an airplane.

A 12-minute panoramic video was shot with the help of four cameras. These unique images became the world’s first 360-degree aerial survey of North Korea, the most isolated state on the planet. Of course, the survey was previously agreed upon and approved by the DPRK authorities with the support of the National Tourism Agency (NTA) and the Korean International Travel Company (KITC).

The video can be considered, for example, the famous First of May Stadium, which is located on the small sandy island of Nynnado in Pyongyang and is the largest in the world in terms of capacity. The object with a total area of ​​207 thousand square meters was built in 1989 for the XIII Festival of Youth and Students. The stadium is designed for 150,000 spectators and is now used for competitions and celebrations.

Aram Pan argues that the North Koreans, contrary to prejudice, turned out to be very friendly people. They are very proud of their country and its capital, so they gladly allowed to capture the city on video with the help of panoramic video. Of course, the special person then watched the footage and deleted about 10% of the frames, but even he, according to the photographer, was very polite.