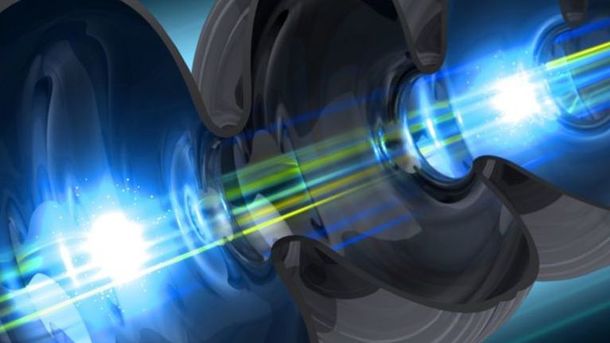 The X-ray LCLS laser allowed physicists to “catapult” almost all the electrons of one atom in a molecule and temporarily turn it into a miniature analog of a black hole that attracts electrons to the force of its cosmic fellow.

“The strength with which electrons were attracted to the iodine atom in this case was much larger than that produced by a black hole with a mass of ten Suns in. In principle, the gravitational field of any black hole of the stellar mass is incapable of acting in a comparable manner On an electron, even if it is close to the horizon of events, “- says Robin Santra (Robin Santra) from the German Synchrotron Center DESY.

Santra and his colleagues created a similar miniature black hole, focusing the entire beam of the LCLS X-ray laser, until the most powerful installation of its kind in the world, on a point just 100 nanometers wide. This is approximately equal to the length of a large organic molecule and several hundred times smaller than the width of the beam, usually used in experiments with similar radiators.

Due to this, the laser beam power reached 10 billion gigawatts per square centimeter, close to the mark where ultra-relativistic effects begin to appear and light begins to spontaneously turn into matter and antimatter.

The collision of such a pulse with single atoms of xenon and iodine, as shown by the first experiments of physicists, leads to the fact that they lose virtually all their electrons and acquire a fantastically high oxidation state – +48 or +47, which results in a record high positive charge.

The scientists decided to test how this charge can affect the behavior of other molecules and atoms, combining iodine with methane and ethane molecules, “transparent” for X-rays and not reacting to irradiation with similar rays.

The results of these experiments turned out to be fantastic – irradiation of such molecules with a laser for only 30 nanoseconds resulted in the fact that iodine atoms turned into peculiar electric black holes for a few moments after they had been irradiated by an X-ray beam.

These atoms, contrary to the expectations of scientists, lost much more electrons – not 46 or 47, but 53 or 54 particles. The process did not stop there, and iodine atoms, like supermassive black holes, began to pull electrons from other parts of the molecule, to disperse and “spit” them out in the form of beams, similar to the ejections of their cosmic “cousins”.

As a result, the entire molecule of iodomethane virtually instantaneously disintegrated itself, having lived only a trillionth of a second after the laser bombardment began. Something similar, scientists believe, can occur with the contact of living organisms with X-ray radiation, and the study of this process will help us understand how to reduce or neutralize the damage from radiation.

“Iodomethane is a relatively simple molecule that helps us understand what happens to organic molecules when they are damaged by radiation, and we believe that this reaction is even more violent in iodetane and other complex molecules where iodine can emit up to 60 electrons, but so far We do not know how to describe it.The solution of this problem is our next goal, “concludes Artem Rudenko of the University of Kansas (USA), the first author of the article.