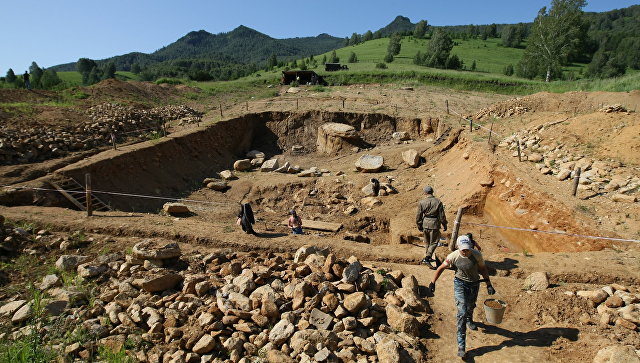 New finds and research by archaeologists of the most ancient layer of the Karam paleolithic site in the Altai have confirmed the hypothesis that primitive man first appeared in the center of Eurasia in modern Siberia about 800 thousand years ago, told the journalists on Thursday the Director of the Institute of Archeology and Ethnography of the SB RAS Mikhail Shunkov.

He explained that Altai today is one of the key areas in solving the problem of the initial settlement of a person across Eurasia. Archaeologists are exploring a whole series of multi-layered sites that allow us to trace the development of culture in dynamics for thousands of years. This year, the work was carried out on the Palaeolithic site of Karama, in the caves of Chagyrskaya, Strashnaya, Denisova. All monuments are located in the valley of the Anuy River.

“The Early Paleolithic site of Karama is the oldest archaeological site in northern and central Asia, and this year the works were focused on the study of the lowest and most ancient 12 layers of this site, which dates back to an age of about 800 thousand years,” Shunkov said.

The scientist said that this year new collections of stone artifacts were obtained here – these are the most ancient pebble tools in the history of mankind, which in their appearance are closest to the famous Olduvai African finds.

“These data once again allowed us to confirm the hypothesis that the settlement of the territory of Eurasia, including southern Siberia, occurred from the west with the first migration wave of the oldest hominids at the homo erectus stage, which about 2 million years ago went beyond Africa. we precisely date these deposits – about 800 thousand years ago for the first time primitive man appeared on the territory of Siberia, “Shunkov said.